Yasir Shah became joint-second fastest to 100 wickets in Tests when he took 5 for 121 in his 17th match against West Indies in both side's first day-night Test on Day Four.

Wily Pakistan leg-spinner Yasir Shah wished he had a Test face off with magician and India‘s premier off spinner Ravichandaran Ashwin in a battle of two fast wicket-taking spinners. Shah became the joint-second fastest to 100 wickets in Test cricket when he took 5 for 121 in his 17th match against West Indies in both side’s first day-night Test in Dubai on Day Four of first Test. England’s George Lohmann holds the record of fastest to 100 Test wickets when he completed the tally in his 16th Test in 1896. Australia’s Charlie Turner and Clairre Grimmett and England’s Sydney Barnes all reached 100-mark in their 17th Test. Shah said Asiwn’s best luck message was an inspiration. LIVE CRICKET SCORECARD: Pakistan vs West Indies, 1st Test at Dubai

“Yes, he had said good luck so I am thankful. It’s naturally motivating when a great bowler who is second fastest to 200 tweets a good luck message and it’s really a great motivation for me”, said Shah of the Indian master’s tweet.

Ashwin, who became the second fastest to 200 wickets in the recently concluded home series against New Zealand in 37 Tests — one match more than Grimmett — had wished Shah “best of luck” in a tweet last week.

“Good luck, may the force be with him. He is such a delight to watch,” Ashwin had tweeted last week.

Shah had 76 wickets in his first 12 Test and took ten against England at Lord’s but couldn’t complete 100 in the next three matches. Shah said he wishes he play against Ashwin.

“Every Pakistani and Indian player has this wish to play against each other. I have not played a Test against India so it’s my wish”, told Shah.

Political tensions have not allowed Pakistan and India to play a Test series against each other since 2007.

India stalled all bilateral series with Pakistan in the wake of 2008 Mumbai attacks, which New Delhi blamed on militants based across the border.

Ashwin had made his Test debut in 2011 while Shah has only started playing Tests two years ago. But both have crossed paths in a ICC Cricket World Cup 2015 match at Adelaide when Ashwin got one wickets and Shah went wicket-less.

With India being No. 1 in ICC Test rankings and Pakistan No. 2, there was a suggestion of having a one-off Test to determine a world Test champion. But a renewed tension between the two arch-rivals since an attack on a military base in Indian administered Kashmir which left 17 soldiers killed have left the two nations close to war. That has left no chance of cricket between the South Asian nuclear rivals.

Shah said he has faced no problems in his comeback from a failed dope test of 2015.”I was lucky that I was suspended for three months only and I did not lose any Test series and since my come back I have found no problems,” concluded Shah, who escaped a lengthy ban after admitting to taking hyper-tension tablets. 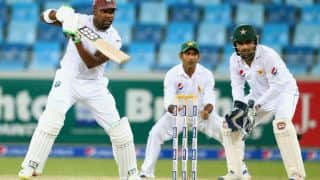