Yorkshire have welcomed the idea of Yohan Blake playing for them in the future.

Jamaican sprinter Yohan Blake revealed on Friday that he would like to play for English County cricket team Yorkshire when he ends his athletics career.

“I’m OK, you know. I can make the England team,” the 24-year-old double Olympic silver medalist joked on BBC Radio 5 Live. “I’m good in the outfield, so they would probably pick me for that as well.”

Asked if he was serious about swapping the track for the crease, he added: “Yes, definitely. I’ve been wanting to play for Yorkshire or in England so, after running, definitely I’ll put my mind to that.”

He went on to claim that talks had already taken place, saying: “We have some talks with some of the people [at Yorkshire] and we are looking forward for it.”

Asked when he foresaw himself joining Yorkshire, he said: “Well, probably like when I’m 29, I’ll come off the track and field.”

Yorkshire welcomed Blake’s interest, tweeting via their official account: “Hey @YohanBlake you’re always welcome to come and play for Yorkshire. Let’s get this sorted and come and have a net with us.”

They also tweeted the following:

Come and have net with us @YohanBlake what are you waiting for! http://t.co/vLoR5l75s0 #YCCC pic.twitter.com/3bNRVbwBco

Blake was a keen cricketer as a youth and reportedly only turned to sprinting after one of his teachers noticed how quickly he ran when he came in to bowl. 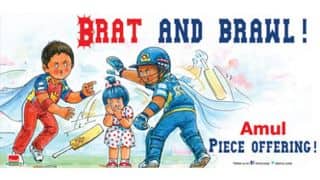