Bombay High Court has asked the governing body of cricket in the country to look into cricketer Hiken Shah's request.

Observing that the BCCI cannot level serious allegations and suspend a player only on the basis of “hearsay”, the Bombay High Court has asked the governing body of cricket in the country to look into cricketer Hiken Shah‘s request for a hearing against such an action.

Shah, a Mumbai batsman, was suspended from the game in July, 2015 by the Board of Control for Cricket in India (BCCI), after he was found guilty of breaching its anti- corruption code for the players.

Shah had approached the high court, challenging the suspension, and claimed that he was not given an opportunity to present his arguments.

The cricketer recently wrote a letter to the cricket board, urging to reconsider its order.

When Shah’s petition came up for hearing yesterday, a bench of justices S M Kemkar and G S Kulkarni was informed that till date, the BCCI had not examined a single witness against Shah and was yet to take a final decision on the matter.

“This is a violation of a person’s basic rights. It has been over two years since the petitioner was suspended…much punishment he (Shah) has already suffered,” Justice Kemkar said.

“You (BCCI) have not examined a single witness till date.

Just on the basis of hearsay, you have suspended him (Shah).

Anyone can say anything about anybody and you take action…You cannot treat a sportsman like this,” Justice Kulkarni said.

The bench asked the cricket board to consider Shah’s request that his case was considered sympathetically. In then posted the petition for a further hearing in January.

According to the BCCI, Shah had made a “corrupt approach” to another player, who was a member of an Indian Premier League (IPL) team. The player, allegedly approached by Shah, had immediately apprised his franchise of the incident and the franchise had subsequently reported the matter to the BCCI’s Anti-Corruption Unit. 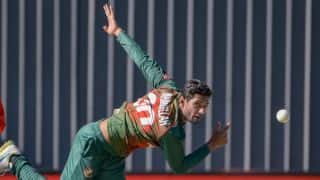