Pope has been in brilliant form for County Championship leaders Surrey this season, scoring 684 runs at a huge average of 85.50, including three centuries and a top score of 158 not out

Ollie Pope hopes to follow in the footsteps of fellow 20-year-old Surrey rising star Sam Curran during England‘s Test series with India. Top-order batsman Pope is set to make his England debut at Lord’s later this week after being called into the squad for the second Test in place of the dropped Dawid Malan.

County colleague Curran starred with both bat and ball as England beat India by 31 runs in the first Test at Edgbaston last week to go 1-0 up in the five-match series. Now Pope, who has played just 15 first-class matches, would love the chance to prove, as Curran did in Birmingham, the old adage that ‘if you’re good enough you’re old enough’ right.

“The way he (Curran) played last week can give me confidence to know I can do it,” Pope told reporters at Lord’s on Tuesday. “I’ve played with him since we were 14 or 15 — as soon as he came over from Zimbabwe — and we’ve gone through the same path. I’ve had a good season so far. I have confidence in my own game to take the next step. You hear stories of some of the greats of the game, people like Alastair Cook. I think he was 20 when he made his debut, so it’s not like it hasn’t been done before,” the youngster added.

Pope has been in brilliant form for County Championship leaders Surrey this season, scoring 684 runs at a huge average of 85.50, including three centuries and a top score of 158 not out. He also made an unbeaten fifty for the second-string England Lions in a 253-run win over India A in a first-class fixture at Worcester last month.

But if England decide to bat Pope in Malan’s number four position, when the second Test starts on Thursday, he will be two places up the order from the number six berth he usually occupies at Surrey. Pope, asked if he would be ready to bat at number four, replied: “If required, yes. Especially against this India side, where they bowl a lot of spin. It’s not massively different. When I bat at six sometimes I’ve been in the 10th over, other times I’m in for the second new ball. In the four to six region I don’t think there’s a massive difference in the way you play.” 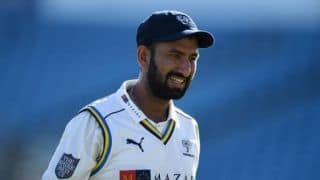 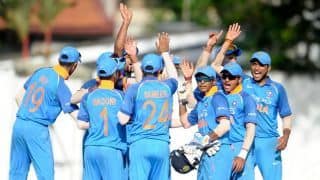