Does Younis Khan regret missing out good years of captaincy? Here is what he has to say.

You ought to be a natural leader when you lead your side to a title at an ICC event. Younis Khan had led Pakistan to the 2009 World T20 title. A few months later he chose to resign amidst allegations of match-fixing. His captaincy tenure has been interesting. He has rejected to lead, won an ICC tournament and resigned. While he ended as one of the greats of the game, rating Younis as a captain is not easy. What if he had continued? We will never know the answer to the if ; all we know is that Misbah-ul-Haq did well to take over the reins in 2010, see Pakistan through turmoil, bring back normalcy and help them scale great heights.

With the two stalwarts retired, does Younis regret missing out good years of captaincy?

People say to me, you should ve done more captaincy. But I think whatever happens, happens for the best. Had I been captain maybe I wouldn t have scored all these runs. People think that maybe I carry these regrets, but no. Had I done more, who knows whether I would be where I am today? If I had been captain for so long, maybe I would ve been too distracted by other duties to score as many runs as I did, said Younis in an interview with ESPNCricinfo. ALSO READ: Record breaking numbers from Younis Khan s illustrious Test career

Younis says this despite averaging close to 56 (his career average is just over 52) in the 9 Tests as captain. Younis feels he has given 200 per cent as a cricketer and has established himself as one of Pakistan s finest batsmen and role models: All the cricket I ve played for club, department, association, county, in Australia, wherever when I m gone if you ask any of them, they won t be able to say that Younis Khan left something in the tank. I gave 200% everywhere I played. Two-three years ago, I was about to retire but I got the motivation to try and get to 10,000 runs. As a captain, player, junior, senior, I put it all out there, whatever I had. Whatever I could, with bat, ball, in the field. No regrets either. We won a world title, we beat Australia, levelled a series in England. We performed, I performed so there s nothing left that I really wanted to do.

There have been reports in the media that Younis will be coaching Afghanistan. Some have mentioned that he has already taken up a role as Pakistan s Under-19 coach. But Younis, unlike Misbah, doubts if he has any energy left to contribute to cricket:

Believe me I think, in all, I ve given 27-28 years of my life to cricket. So I have nothing in my mind about any future plans to get back into cricket. I don t know if I ll have any energy left after I leave to give cricket. A players association should happen for sure, but I don t think I have the energy to be able to do something like this. We should do this, and if others start it up, then I will stand by them for sure, said the 39-year-and-118-Test-old Younis, the first to enter the 10,000-run club for Pakistan. 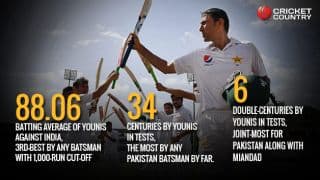