Younis Khan slammed his 24th century in Test cricket as Pakistan recovered from a shaky start to post a total of at stumps, against Sri Lanka in the opening Test match of their two-match series at Galle on Wednesday.

Younis faced balls and cracked boundaries as well as fours to score not out, which came off balls. He held together the Pakistani innings, especially at a time when they lost the top order early on in the first day. The top-order looked rusty with Ahmed Shehzad playing a lose stroke to get out in the second over of the match.

Pakistan started off really slowly as the hosts were right on the money from the very beginning. Pakistan lost their openers Khurram Manzoor (3 from 19 balls) and Ahmed Shezad (4 from 3 balls). Ahmed Shezad, much was expected from him but he ended playing a wide delivery and played it on to the stumps. Azhar Ali looked (30 from 69 balls) promising but he too fell for a brilliant delivery from Rangana Herath. It was indeed a typical Rangana Herath delivery which drifts and then spins ominously away from the batsman.

After this, Pakistan looked really unsteady and then came Misbah-ul-haq. The Pakistan skipper also made his way to the list of the captains who have led their respective side at the age of 40 or more. He became the 21st captain in the history of the game of cricket. But much was expected out of him as he came out to bat with Younis Khan almost at the same time just before lunch. The Pakistani ship was steadied by these two but the approach that Misbah took was not really fruitful for Pakistan. The strike was not being rotated,the runs were flowing only from the other end where Younis Khan kept on scoring and he he also completed his 29th half-century by tea. Pakistan were 140 for 3 at the end of tea on Day 1 with Misbah on 22 from 81 balls and Younis Khan on 77 from 153 balls.

Pakistan probably realised that they should up the tempo as they have seven wickets in their bag. Younis Khan started playing his shots all over the ground but it did not make much difference for Misbah as he continued playing his slow and frustrating cricket. Rangana Herath was handed the ball to break this partnership and he did. The skipper also got out on a typical Rangana Herath ball which drifted and spun away from him. He only managed to score 31 from 100 balls, if he played his natural game he would scored a lot more runs than he did.

The day has been quite eventful for Younis Khan and as well as the Sri lankan bowlers. Dhammika Prasad and Rangana Herath were their pick of the bowlers. Both of them picked up * wickets each. Sri Lanka almost got the better Younis Khan twice as the ball rapped on to his pads but he reviewed both the decisions and regained life and eventually went on to complete his 24th century in 181 balls with eight boundaries and a solitary six. Asad Shafiq came in handy with his bat as he was preferred over Umar Akmal. He played a good supporting role to Younis Khan who anchored the innings throughout the day post lunch. Much was also expected out of Shaminda Eranga as he came into the squad in place Suranga Lakmal who had to be left out of the team because of his injury. Pakistan ended the day with 261  for four. They definitely look to have steadied themselves after the early slump. It also seems that it was a brave decision on Misbah’s part to bat first in spite of the overhead condition. Younis Khan is still at the crease (133 runs from 228 balls) and Asad Shafiq (55 runs from 110 balls). Younis Khan delivers in yet another crisis situation 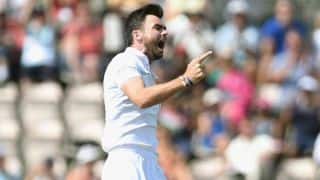