Pakistan were back in control at the end of Day Four that saw Zimbabwe lose their first wicket in the second essay after Younis Khan's double century (200 not out) and Adnan Akmal's half-century (64)helped Pakistan set a target of 342 in the first Test in Harare. 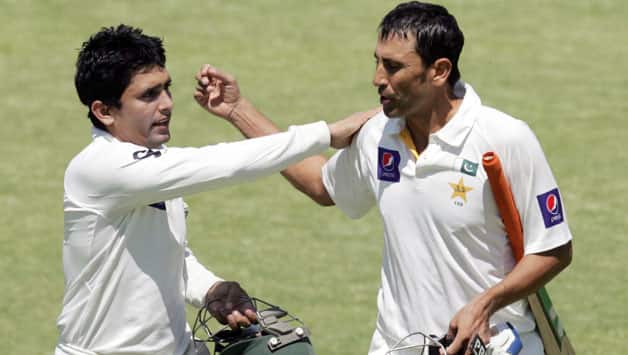 Pakistan were back in control at the end of Day Four that saw Zimbabwe lose their first wicket in the second essay after Younis Khan‘s double century (200 not out) and Adnan Akmal‘s half-century (64) helped the visitors set a target of 342 in the first Test in Harare.

At close of play, Zimbabwe were on 13 for one, needing 329 runs to win from three session on the final day.

Zimbabwe started the day with the hope to make further inroads into the Pakistan line-up after they were on 168 for four and a collapse could have triggered an unexpected win for the visitors.

They were even in with a chance after Asad Shafiq, who was batting alongside Younis in on the previous day, was dismissed early by Tendai Chatara.

However, Adnan Akmal and Younis strung together a solid partnership to take Pakistan out of a precarious position. They added 118 runs for the sixth wicket, a partnership during which Younis brought up his 22nd Test century. Akmal too, played a key role in rebuilding Pakistan’s innings and scored a well-paced 64.

The Zimbabwean bowlers performed better in the second innings and the scoring rate dipped considerably. Towards the end of that session, Zimbabwe struck twice to get rid of Akmal as well as Abdur Rehman. Younis, however, was unbeaten on 136.

Zimbabwe struck early to get rid of Saeed Ajmal and Junaid Khan with the score on 331. But a final wicket unbeaten partnership of 88 frustrated the hosts and put the game virtually beyond their reach.

The declaration was long overdue with Misbah waiting for Younis to complete his personal milestone of a double ton. When Younis was on 194, Misbah signalled to him conveying that he had just one more over before to get to 200. Younis obliged and got there with a big six over over deep midwicket off Prosper Utseya. Misbah immediately declared with the score on 419 for nine, setting a target of 342 to for the visitors.

Just when the hosts thought they could get away unhurt from the last nine overs in the day, Misbah threw the ball to Ajmal who struck in his second over to trap Tino Mawoyo in front of the stumps. Close of play was called at the fall of this wicket.