Centuries from Arjun Azad and NT Tilak Varma played a pivotal hand in India Under-19 notch up a 60-run win over Pakistan.

Centuries from Arjun Azad and NT Tilak Varma played a pivotal hand in India Under-19 notch up their second win of the Youth Asia Cup 2019 with a 60-run victory over Pakistan. Azad and Tilak, batting together, added 183 runs for the second wicket, forming the base of India s 305/9.

Pakistan s responded with a century themselves, with skipper Rohail Nazir slamming 117 off 108 balls but left-arm spinner Atharva Ankolekar starred with 3/26 to bowl the opposition out for 245. Medium pacers Vidyadhar Patil and Sushant Mishra chipped in with a couple of wickets each.

India lost opener SV Parkar cheaply in the eighth over before Azad and Varma batted out the next 20 overs playing attractive shots. Azad, more aggressive of the two, smacked 11 boundaries and four sixes, whereas Varma scored a boundary and three sixes less than his fellow centurion. Their near-200 partnership knocked the stuffing out of Pakistan s bowlers.

However, once the stand was broken, with Azad cleaned up by Aamir Ali, the rest of the batsmen failed to show resistance, including skipper Dhruv Jurel, who could only score 10 before falling to Mohammad Aamir. SG Rawat and Ankolekar were the only other batsmen who could enter double figures as Naseem Shah and Abbas Afridi (despite conceding 72 runs in 10 overs) made short work of India s middle and lower order with three wickets each.

Chasing a stiff target, Patil took out Pakistan s openers with Haider Ali and Abdul Bangalzai dismissed off the pacer s consecutive overs. Fahad Munir endured 15 tough deliveries before the 16th finally ended his rusty stay in the middle. At 53/3, Pakistan needed someone to bat through the innings in order to challenge India s total and the responsibility was taken by none other than their skipper Nazir.

Nazir hot 12 boundaries and three sixes en route to scoring his maiden List-A century. In the company of Haris Khan, who hung in there to score 43 off 53 balls and scored two boundaries and a six, Nazir added 120 runs for the fourth wicket. Ankolekar broke the flourishing stand and added two more sending back Afridi and Shah in back-to-back overs.

With less than 100 needed in the last 10 overs, India got the big wicket of Nazir, the skipper s fight ending on 120, out LBW to Akash Singh. The India bowlers were ruthless there onward and took six overs to wipe out the tail and dismiss Pakistan for 245 in 46.4 overs. 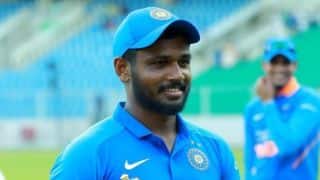 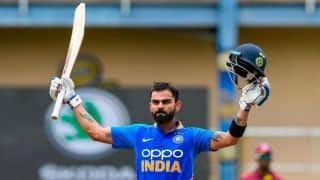