Sri Lanka U-19 rode on Nipun Dananjaya Perera's unbeaten 92 to beat India by five wickets in the second Youth ODI and draw level the five-match series 1-1 on Thursday.

Sri Lanka U-19 rode on Nipun Dananjaya Perera’s unbeaten 92 to beat India by five wickets in the second Youth ODI and draw level the five-match series 1-1 in Colombo on Thursday.

Opting to bat, India were bowled out for 193 in 47 overs at the Sinhalese Sports Club Ground.

In reply, the home team chased the target with 26 balls to spare.

Opener Pawan Shah top-scored for India U-19 with 49 off 64 balls, hitting six boundaries.

Left-arm spinner Shashika Dulshan was the pick of the Sri Lanka bowlers with figures of 3/27 from his 10 overs, while there were two wickets apiece for Naveen Fernando, Lakshitha Manasinghe and Navod Paranavithana.

The Sri Lankans were off to a poor start with the bat, losing Paranavithana cheaply, but Perera along with Pasindu Sooriyabandara (52 off 71 balls) batted well to see their team home. 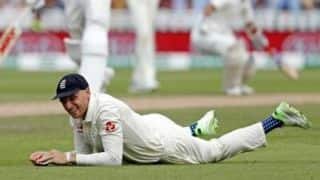 India vs England: Jos Buttler in hospital for X-ray on injured finger