Pathan has scored only 79 runs from 6 matches with his highest score being 28.

Baroda squad has left out Yusuf Pathan ahead of their quarter-final clash against Saurashtra in Vijay Hazare Trophy 2018. He will be replaced by Akshay Brahmbhatt. Pathan had an unpleasant outing in the tournament. He has scored only 79 runs from 6 matches with his highest score being 28. He has been unimpressive with his bowling as well bagging just a wicket.

BCA official explained their dilemma and the reason behind leaving out Pathan at a crucial juncture: “Yusuf played six matches in the tournament but didn’t perform well. So, it was decided to drop him and give chance to another player. His poor performance is the only reason behind leaving him out,” as quoted by Cricbuzz.

Pathan was under scrutiny for failing the anti-doping test. However, after being relieved from his five-month ban, Pathan was available to play the tournament. He passed the fitness test and was included in the Baroda team at the last minute. 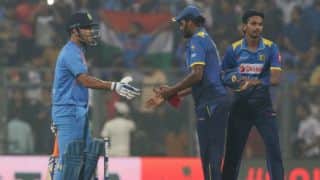