Yuvraj and Bolt will contest each other at M Chinnaswamy Stadium, Bangalore.

Jamaican sprint superstar Usain Bolt will make his first trip to India next week to play cricket against India’s 2011 World Cup hero Yuvraj Singh, organisers said on Tuesday. The cricket face-off — titled ‘Bolt and Yuvi – Battle of the Legends’ — is being organised by sportswear giants Puma and will take place at the M Chinnaswamy stadium in Bangalore on September 2.

The format and details of the game have not been revealed. “Puma brings Usain Bolt down for a one-of-a-kind cricket face-off between two sporting legends,” the organisers said in a media release. “For the first time ever, watch the fastest man on earth challenge Yuvraj Singh to an exclusive cricket showdown.”

Bolt, 28, a six-time Olympic gold medalist and world record holder in both the 100m and 200m, is an ardent cricket fan who in the past has expressed a desire to play in the Indian Premier League. Yuvraj, a left-handed all-rounder who is not part of the Indian team currently touring England, was man of the tournament when Mahendra Singh Dhoni‘s men won the World Cup in Mumbai in 2011.

The Athletics Federation of India (AFI) said it had no role in Bolt’s brief visit to the country. “Both Bolt and Yuvraj are brand ambassadors of the sponsors, we are not involved in this programme,” an AFI official said. 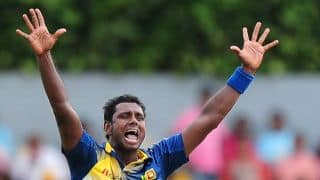