Indian cricket’s very own rock star Yuvraj Singh took to Twitter to congratulate Real Madrid’s star player Cristiano Ronaldo over his side’s 5-3 penalty shoot-out win over Atletico Madrid on Saturday night in the final of UEFA Champions League 2015-16. Ronaldo came up to take the 5th penalty for Real which if scored they would have been crowned new champions and Ronaldo did exactly that.  With a 3-3 score line after Atletico’s Juanfran missing his the 4th penalty for his team it was almost sure that Ronaldo would do the honours. West Indies’s T20 World Cup hero Carlos Brathwaite was not far behind in wishing Ronaldo as well. Full Cricket Scorecard: Royal Challengers Bangalore vs Sunrisers Hyderabad, IPL 2016 Final

Yuvraj will want to take inspiration from Ronaldo and help his side Sunrisers Hyderabad (SRH) win the Indian Premier League (IPL) 2016 title for the first time when they take on Royal Challengers Bangalore (RCB) which has Chris Gayle in their arsenal. 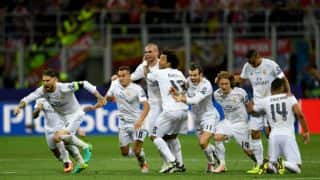 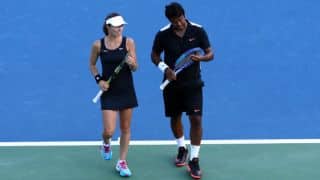