India A captain Yuvraj Singh pointed out the lack of partnerships and good bowling show from the West Indies A for his team's loss in the second unofficial ODI at Chinnaswamy stadium. 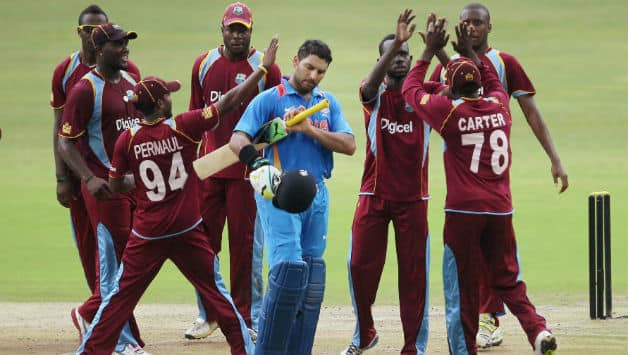 India A captain Yuvraj Singh pointed out the lack of partnerships and good bowling show from the West Indies A for his team’s loss in the second unofficial ODI at Chinnaswamy stadium.

“I think they (WI) all bowled in very good areas and didn’t allow us to score freely, and that set the game for them. When pressure is there it is tough to score and I think we never had good partnerships to register a win,” Yuvraj told reporters after his side lost by 55 runs.

The three-match series is levelled at 1-1.

Yuvraj also expressed disappointment over failing to overcome the target despite boasting off a strong batting line-up.

“When the guys are not going to get runs, you can never win games,” he said, adding that the top order should have batted better to get to a target of 280.

“If we don’t get partnerships, we will not reach the goal. Therefore, it is important that we start well in the next game,” the skipper said.

Asked whether it would be prudent for him to bat first in the decider because the chasing side have lost in both the matches, Yuvraj said: “Looking at the condition, the ball was doing much more in the second innings. However, I hope to lose the toss for the next one.”

West Indies A captain Kieran Powell lavished praise on centurion Jonathan Carter (133) and Leon Johnson (39) for seizing the opportunity and playing a massive role in the team’s victory.

“Everyone can’t play and unfortunately those two guys had to miss out in the first match,” Powell said.

Powell said he wasn’t surprised by Carter’s performance and his teammates were expecting a big one on Tuesday. The 25-year-old had walked into bat when West Indies were precariously poised at 21 for two.

On his own lack of form, Powell said, “Well, I will say I am in pretty good form. I would have been more worried getting around 20s and 30s and getting out. I haven’t actually got in, you know.”