Yuvraj Singh was thinking only of survival during chemotherapy

Yuvraj Singh was thinking only of survival during chemotherapy

India's flamboyant cricketer Yuvraj Singh, who was battling with cancer, finally came out of it and now is all set to spread the awareness of early detection through a show titled 'Zindagi Abhi Baki Hai'. 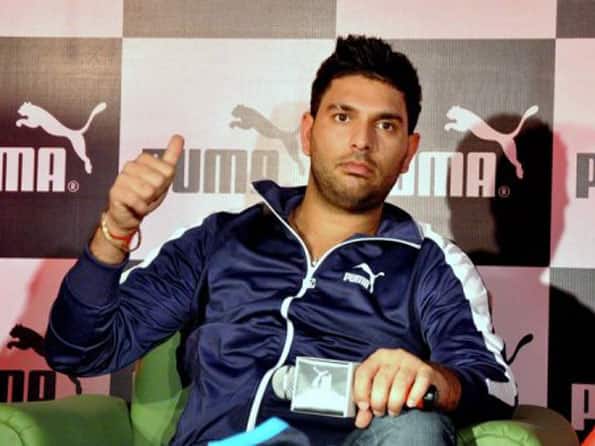 Yuvraj Singh during his battle with cancer looked up to former American cyclist Lance Armstrong, also a cancer survivor, while undergoing treatment in the US AFP

India’s flamboyant cricketer Yuvraj Singh, who was battling with cancer, finally came out of it and now is all set to spread the awareness of early detection through a show titled ‘Zindagi Abhi Baki Hai’.

Going down the memory lane Yuvraj recalled the days when he was battling rare germ cell cancer. Yuvraj, who was the hero of India’s 2011 World Cup win, said when he was diagnosed with cancer the only thought in his mind was that of “saving his life”.

“Before cancer life was happy go lucky and the only tension was about my future, career, to win matches. But when I was diagnosed with cancer I only used to think about saving my life. When I came back home saving my life I was thankful to god for giving my life back,” Yuvraj told reporters.

Yuvraj underwent treatment in US and returned home in April. The southpaw has been selected in the India squad for the Twenty20 World Cup and will also be seen in action in the two Twenty20s against New Zealand this month.

Yuvraj said during his fight he used to have negative thoughts in his mind.

“Yes there were times when I used to have some negative thoughts. I used to think chemotherapy has spoiled my body, I thought drugs make me worse but it was good for me. All I used to think was I will go back and play for India one day,” he said.

“It was difficult I was not sure whether I will survive but I was positive that I will come out of it. One day my doctor said I have seen all your tests you are doing really well you have shown lot of courage when you will walk out of this hospital you will be a man who never had cancer. It was very motivating and inspiring to me what doctors told me so that made me more positive,” he added.

During his battle with cancer he was inspired by cycling legend Lance Armstrong, also a cancer survivor, and says he is the true hero.

“Lance Armstrong will always be a hero he is somebody who has battled cancer and comeback these kinds of things motivated. He is a real life hero. My course system was strong for me to comeback. There were very few people around me but people who really mattered,” the 30 year old said. (IANS)