Yuzvendra Chahal surpasses Rashid Khan and Kesrick Williams in most wickets in T20I in 2017.

Yuzvendra Chahal surpasses Rashid Khan and in most wickets in T20I in 2017. Afghanistan s Rashid Khan and West Indies Kesrick Williams have both picked up 17 wickets. Chahal surpassed them by taking 19 wickets when he bagged four Sri Lankan wickets in the first T20I between Sri Lanka and India. He conceded 23 off his 4 overs. He dismissed the Sri Lankan top order by getting the wickets of Upul Tharanga, Angelo Mathews, Asela Gunaratne and Thisara Perera.

Chahal struck in his first over when Tharanga got out to a poor delivery: Chahal bowled down the leg as Tharanga ended up nicking it, and MS Dhoni took an easy catch. Gunaratne was stumped off a wide: Dhoni fumbled a bit but was quick enough to disturb the bails. Mathews, who was struggling to hit the ball, ended up misting one to Chahal. However, Dhoni was lightning quick to stump Thisara.

Chahal has a great chance of staying at the of the most-wickets list in 2017 with two more T20Is: Rashid won t be playing any more, while Williams will have an opportunity on December 29. 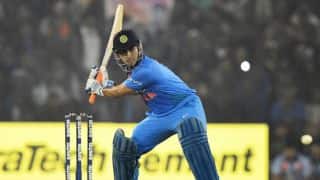 India vs Sri Lanka, 1st T20 at Cuttack in pictures