Zafar Ansari announces retirement from all cricket with immediate effect

Zafar Ansari announces retirement from all cricket with immediate effect

The 25-year-old player, who is one of the most educated cricketers of all time, has reportedly taken this decision to pursue a career in law. Ansari has made a 3-Test and a solitary ODI appearance for England.

In a shocking development, England and Surrey all-rounder Zafar Ansari, who made his Test debut last year against Bangladesh and even featured in two Tests against India, announced his decision to retire from all forms of cricket with immediate effect on Wednesday. The 25-year-old player, who is one of the most educated cricketers of all time, has reportedly taken this decision to pursue a career in law. Ansari has made a 3-Test and a solitary One-Day International (ODI) appearance for England. Besides, he has been with Surrey CCC since the age of eight, playing in every age group within the club system.

“After seven years as a professional cricketer and almost two decades in total playing the game, I have decided to bring my cricket career to an end,” Ansari said in a statement released by Surrey. “This has been a very difficult decision to make and I have not made it lightly. It is… with great sadness that I say goodbye, he added.

Ansari also said that he was always clear about the right time to move away from the game. “Nevertheless, I have always been clear that when the time was right for me to move on I would, and that time has now come. While the timing may come as a surprise, I have always maintained that cricket was just one part of my life and that I have other ambitions that I want to fulfil. With that in mind, I am now exploring another career, potentially in law, and to achieve this I have to begin the process now,” he said in his statement.

Ansari was first capped by Surrey in 2014 and made his ODI debut for England the following year. His Test debut against Pakistan was delayed by a freak hand injury sustained while fielding at Old Trafford in late 2015. He eventually won his first Test cap against Bangladesh in October last year. Ansari has combined his cricket career with academic studies. He secured a degree in Politics, Philosophy and Sociology from Cambridge University in 2013 and was awarded a Master’s degree in History by Royal Holloway, University of London last year.

Alec Stewart, former England captain and director of cricket at Surrey, said while commenting on the development: “Zafar’s exceptionally tough but considered decision is one that we should all respect and understand. We wish Zafar the very best in whatever the future holds for him and he will always be welcomed back to the Kia Oval with open arms.” 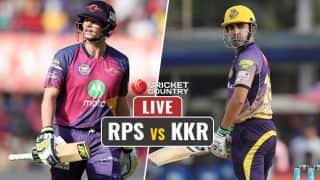