Zaheer Abbas has called on the PCB to adopt England as a neutral venue for its home series instead of the UAE, which is not serving the purpose really well.

Karachi: Former Pakistan skipper Zaheer Abbas has called on the Pakistan Cricket Board (PCB) to adopt England as a neutral venue for its home series instead of the UAE, which is not serving the purpose really well. The PCB has been mulling changing the UAE as their adopted venue because of high cost and is looking to opt for Bangladesh, England or South Africa as its venue for home series. Reflecting on the same, the 69-year-old said that the country s cricket board should replace UAE with England as it would help Pakistan batsmen as well as bowlers to get familiar with the lively playing conditions of the country.

In England, our team will also find a good number of fans who live there, the Dawn quoted Abbas as saying. Abbas also suggested that Bangladesh would not be a suitable option because of the same Asian environment and slow wickets, while also considering the English conditions as the better option for Pakistan players than the South African one. Abbas comments came following Pakistan s disappointing performance on the second day of the ongoing opening Test of the three-match series against Australia at the Gabba. After being asked to bowl first, Pakistan displayed a poor bowling performance and also dropped few catches as Australia posted a massive first-inning total of 429 runs.

Skipper Steve Smith (130) and Peter Handscomb (105) each struck a blistering centuries besides sharing a huge 172-run stand for the fourth wicket to guide Australia past 400-run mark. In reply, besides Sarfraz Ahmed (unbeaten at 59), none of the other Pakistan batsmen managed to counter Australia s bowling attack and were eventually bundled out for 142.

Admitting that his side failed to perform in all three departments of the game, Abbas insisted that his bowlers should have restricted the Australian batsmen keeping in mind their own weak batting line-up. Our bowlers failed to restrict Australian batsmen in the first Test, which was necessary keeping in mind our batsmen s unreliability on fast and bouncy tracks.We also dropped catches and did not even appeal for dismissals on some occasions. We just failed to perform in all the three departments of the game, Abbas said. 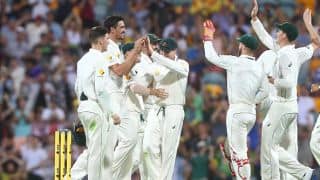