Former Pakistan skipper and ICC President Zaheer Abbas is the latest to wish MS Dhoni on his successful captaincy tenure, saying it will be difficult to emulate the wicketkeeper batsman's achievement as a leader.

New Delhi: Former Pakistan skipper and ICC President Zaheer Abbas is the latest to wish MS Dhoni on his successful captaincy tenure, saying it will be difficult to emulate the wicketkeeper batsman’s achievement as a leader. Abbas said Dhoni has raised the bar as a captain and it will not be easy for any skipper to emulate his success. “He (Dhoni) has given outstanding contribution to Indian cricket team in all three formats and won so many matches. Indian team has touched new heights under his leadership. It will not be easy to emulate his success.”

The 35-year-old Dhoni, under whom India had won two World Cups and a Champions Trophy title, stunned the cricketing fraternity yesterday night by relinquishing the captaincy, barely 11 days before the ODI series against England. Remembering Dhoni’s exploits during Indian team’s tour to Pakistan in 2005-06, Abbas said not only as a captain but as a batsman too he is one of the best. “I remember the 2005-06 tour when he hit a 46-ball 72 to guide India to a five-wicket win over Pakistan in Lahore and became a star when General Pervez Musharraf had praised his long locks and advised him not to cut his hair,” Abbas said.

“It is difficult to produce captains like him but he is equally good as a batsman and that is the most remarkable thing about him. Whenever India was in trouble, he led from the front and made runs. He is a proven match finisher and it is a such a delight to watch his batting,” he said.

Abbas said that what impressed him the most about Dhoni is cool composure on the field despite.

“He is a very nice man and down to earth. He has achieved so much as a captain but success has never gone over his head. He had remained captain cool in most tense and pressure situations and it is a rare quality,” he said.

“As a captain he was a very good decision maker. He had his share of criticism also but I always backed him because I know that the captain knows the best about a team. He is on the field and knows what is to be done. He also did so and gave Indian fans many moments of joy,” he added. 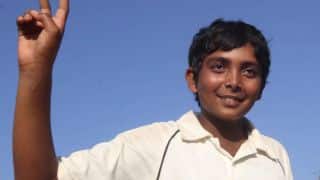