Former Sri Lankan batsman and head coach, Marvan Atapattu has been appointed as consultant batting coach for the Bangladesh Tour starting from January 15

Zimbabwe Cricket (ZC) has made some technical changes on their side by appointing Makhaya Ntini as their assistant head coach while Marvan Atapattu has been appointed as bowling coach for the national team. The 38-year-old, had an illustrious career for 13 years while playing for South Africa, rising from the then United Cricket Board’s development programme and becoming the first African international player for his side. He will join the team from February 16 and he is appointed for two years. Douglas Hondo, former coach of Zimbabwe, has been called upon again as the coach for Zimbabwe A Team. ALSO READ: Makhaya Ntini: Temba Bavuma’s ton opens doors for black cricketers

As reported on Zimbabwe Cricket Website, Ntini has had a memorable Test career, where he picked 10 wickets at Lord’s ground in England. He also picked 13 wickets for 132 against West Indies, being the first South African bowler in that format of the game. Ntini retired from international cricket in 2010, after playing 101 Test matches, 173 One-Day International (ODIs) and 10 Twenty20 International (T20Is) matches for South Africa. ALSO READ: Marvan Atapattu resigns as Sri Lanka Head Coach

Former Sri Lanka coach Marvan Atapattu has been appointed as a consultant batting coach for the Zimbabwe tour of Bangladesh this month. Atapattu was an excellent batsman before turning into coach after retirement. He first took up as batting coach for Sri Lanka in 2011 and later turned as the head coach for his team in 2014 until 2015 when Sri Lanka lost the series against India in their home soil. Before his retirement, Atapattu played 90 Test, 268 ODIs and two T20Is matches for Sri Lanka. He made 5,502 Test runs and is fourth on the all-time double hundreds list.  Atapattu’s contract will be reviewed after the Zimbabwe tour of Bangladesh, with a view to entering into a longer relationship. 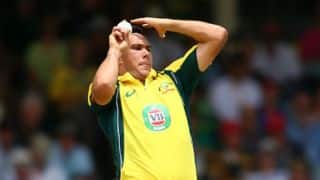