Zimbabwe capitulate to 162 in must-win game

Zimbabwe capitulate to 162 in must-win game

It was deemed to be the virtual pre-quarter-final from Group A. It may have been one but it only went on to reveal the gulf between the virtually fourth-placed New Zealand and their challengers to that spot, Zimbabwe. 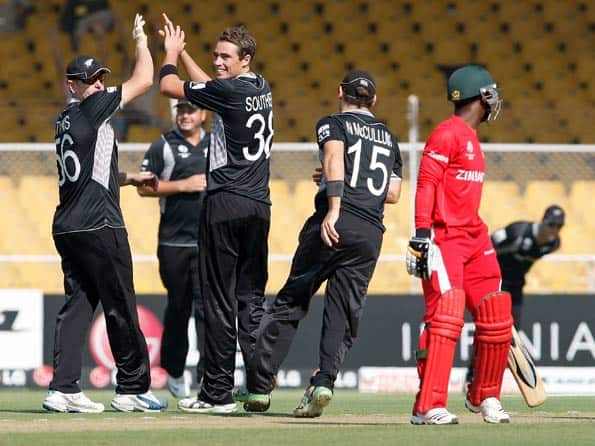 Zimbabwe were bowled out for 162 in their Group A match against New Zealand at Ahmedabad.

It was deemed to be the virtual pre-quarter-final from Group A. It may have been one but it only went on to reveal the gulf between the virtually fourth-placed New Zealand and their challengers to that spot, Zimbabwe.

Zimbabwe had gone into the game having played at the Motera six times. They had lost all. Similarly, in World Cup cricket, the African nation had played New Zealand on five occasions and lost all of them. Any possibility that they would be able to change the aforementioned pieces of statistics depended on how much buffer the batsmen would keep for their spin bowling. As it turned out, the answer to that was, not too much.

Brendan Taylor has not had the best of time in the tournament so far. Going into the World Cup as Zimbabwe s premier batsman, he made 16 against Australia and followed that up with a first-ball duck in the Canada game.

Against New Zealand, Taylor did get a start and even managed to carry it forward towards a half-century. This time, though, the roles were reversed. The rest of the side batted like millionaires, with dismissals brought about by a combination of good bowling and fine New Zealand fielding.

Charles Coventry should have probably run quicker. Shown more intent. On the contrary, he fell short of his crease before he had even opened his account. Tatenda Taibu had been spoken of as their next beacon of hope in this tournament after a 98 against Canada. He offered a simple catch to Daniel Vettori but was floored. Off the very next ball, he fell over, not only to get out but also to waste a review. Zimbabwe 27 for two.

Craig Ervine was the other man who had rescued Zimbabwe in the Canada game. He scraped through to 11 before he attempted to play his favourite cut once too often. The fielder within the circle barely moved to hold on to the catch off his last such shot.

Elton Chigumbura and Regis Chakabva made up the numbers in the middle-order. Played a total of six balls, scored one run and were gobbled up Vettori.

By this time, Taylor would have realised that the only way to go for him would have been to go after the bowling. He succeeded in getting to 44 (57) and looked good for many more the only one who did in the innings. Then, against the run of play, Scott Styris delivered the coup de grace, bowling a rare yorker and leaving the umpire with no option but to raise his finger.

It was the best partnership of the innings, raising 40 for the sixth wicket and sadly for the Zimbabweans, with its end, the side was left without too many in their kitty. Much like in the game against Australia, the lower-order stitched together some worthy stands that pushed the total past 150. Former captain Prosper Utseya, who was the last man out, was surprisingly the only batsman who batted sensibly throughout his knock of 36 before he was left without too many options.

In the hindsight, the question worth asking is whether the decision to bat first, especially in a day game was the right method to adopt. The manner in which the track eased out towards the end of the Zimbabwean innings was another pointer. To be fair to Zimbabwe, they had the spinners to exploit the pitch in the second innings but with a batting line-up that was clearly out of depth in conditions that could assist the New Zealand pace bowling, it did not come out as such a good move.

Bangladesh hope for a turning wicket against West Indies

ICC should learn from FIA how to treat minnows