Zimbabwe Cricket not to renew staff contracts
By CricketCountry Staff

Zimbabwe Cricket (ZC) in a press release stated that they will not be renewing almost all staff contracts which will conclude on 31 August 2018 as part of the their cricket structure and financial strategy.

READ: Zimbabwe players issue ultimate to cricket board over non-payment

Zimbabwe Cricket (ZC) is reviewing its cricket structure and financial strategy due to the need to radically reduce expenses across the board to ensure the sustainability of this great game, the released stated, adding, Strong measures are required to make this a reality. With the above in mind, ZC will not be renewing almost all staff contracts which conclude on 31 August 2018.

However, the board reassured that that the contracts of the national men and women player are being reviewed and will be agreed next week.

Earlier, ZC had announced that the International Cricket Council (ICC) would release funds for the payment of monies owed to current staff and players, including the players match fees for their recently concluded Triangular T20I Tournament featuring Australia, Pakistan and Zimabwe.

This came after to the board had failed to fulfil the commitment to pay staff and players on the 25th of July 2018.

The Zimbabwe national players had earlier asked the board to provide clarity over non-payment of their salaries. They had threatened the board of boycotting upcoming triangular series against Australia and Pakistan in a letter, further putting the economics of the board for a toss.

The domestic season in Zimbabwe starts in November and the staff complement required during the that time have been defined and agreed to suit the ZC cricket strategic direction. 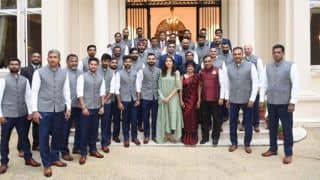 I don't give attention to trolls: Anuskha Sharma on drawing flak over Team India photo-op