ZC released a statement saying they are ready to cooperate with the Zimbabwe's Sports and Recreation Commission to get Zimbabwe back to operating within the confines of the ICC statutes again.

A day after ICC banned Zimbabwe Cricket with immediate effect for breach of its constitution, the board released a statement saying they are ready to cooperate with the Zimbabwe’s Sports and Recreation Commission to get Zimbabwe back to operating within the confines of the ICC statutes again.

The ICC, in their Annual Conference in London on Thursday, unanimously decided that Zimbabwe Cricket, an ICC Full Member, is in breach of Article 2.4 (c) and (d) of the ICC Constitution which imposes an obligation on Members to provide a process for free and democratic elections and to ensure that there is no government interference in its governance and / or administration for cricket respectively,” read a statement from the ICC. ALSO READ: Zimbabwe Cricket suspended: Where do we go from here? Is there a way out? – Sikandar Raza

With this decision, Zimbabwe will no longer receive ICC funding and representative teams from the country will be barred from participating at ICC events. The move also puts Zimbabwe’s participation in next year’s Men’s T20 World Cup Qualifier in jeopardy.

“The ICC has directed that the elected ZC board, chaired by Tavengwa Mukuhlani , be reinstated to office within three months, and progress in this respect will be considered again in October,”the statement read.

The board is committed to ensuring our game is financially stable, thriving and of a world-class standard. And in light of the allegations that have been peddled, we are appealing to the SRC to release the findings of a forensic audit that the government-run body recently conducted into the affairs of ZC. The ZC board would also welcome the ICC to conduct another audit should the world cricket authority so wish,” the ZC further went on to add the press release.

The first casualty of the ICC’s decision was allrounder Solomon Mire, who a day after the crippling development announced his retirement from international cricket.

Mire’s statement on social media came hours after his team-mate Sikandar Raza spoke of the fear and insecurity gripping Zimbabwe’s cricketers following the ICC’s decision to withdrawn funding for ZC and barring the Zimbabwean cricket team from participating at ICC events, such as the T20 World Cup qualifier in October 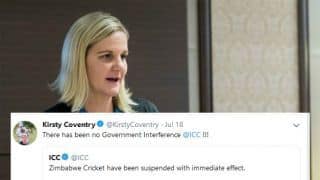 Zimbabwe sports minister Kristy Conventry takes on ICC, tweets 'There has been no Government Interference @ICC !!!”'