Brian Vitori became the first Zimbabwean to take five wickets on his one-day international debut and Vusi Sibanda made a cultured 96 as the home side beat Bangladesh by four wickets in the first of five ODIs at Harare Sports Club on Friday. 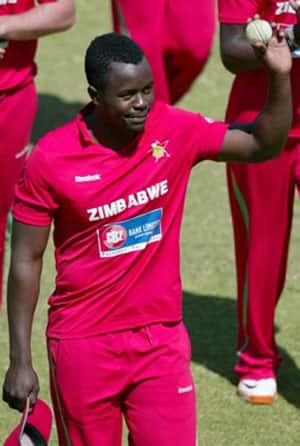 Brian Vitori became the first Zimbabwean to take five wickets on his one-day international debut and Vusi Sibanda made a cultured 96 as the home side beat Bangladesh by four wickets in the first of five ODIs at Harare Sports Club on Friday.

The 21-year-old Vitori took five for 30 as Bangladesh were restricted to 184 all out, the captain Shakib Al Hassan and Mushfiqur Rahim both scoring half-centuries in the only partnership of any merit.

Sibanda then led the way with the bat for Zimbabwe, striking 96 from 102 balls and sharing a second wicket stand of 86 with Hamilton Mazakadza (41) as the home side reached their target with 8.2 overs to spare.

“It was great to have a youngster performing really well and two old hands showing what quality players they still are,” said Zimbabwe captain Brendan Taylor who had no hestitation in asking Bangladesh to bat first when he won the toss.

The tourists made just six in the first five overs before left-arm quick Vitori left a trail of wreckage at the top of the order, snatching four wickets for 21 in a spell of eight overs as he removed Tamim Iqbal for four, Imrul Kayes (11), Shahriar Nafeez (14) and Mohammad Ashraful (2).

At that point Bangladesh were reeling at 33 for four and things got even worse when Mahmudullah was dismissed by Elton Chigumbura for five with the score 43 for five in the 17th over.

Shakib and Rahim then began the fightback, both batting sensibly and securely as they added 105 in 23 overs.

The stand ended, though, when Shakib, who made 53 off 63 balls with just two boundaries, was superbly caught by Prosper Utseya off Mazakadza.

Rahim lasted another four overs, making 59 off 93 balls with five fours, before falling to Utseya, the 100th wicket of his ODI career.

Ray Price and Vitori made short work of the tail with the innings folding eight balls early when Rubel Hossain was run out. Sohrawardi Shuvo, brought into the team in place of Robiul Islam, was left unbeaten on 20.

“We surrendered wickets too easily but when I have taken the time to settle down with them I expect rapid improvement,” said Bangladesh coach Stuart Law.

“They are a quality 50-overs side and that will come through.”

Zimbabwe lost Taylor in the fifth over, bowled for 10 by left-arm spinner Shakib.

Any thoughts Bangladesh may have had, however, of slicing through the Zimbabwe top order were thwarted by an intelligent partnership between the experienced pair Sibanda and Mazakadza, who added 86 in 18 overs.

The partnership ended when Mazakadza was run out by Mahmudullah for 41 from 58 balls. That was the start of a mid-innings wobble which also saw Tatendu Taibu and Craig Ervine both removed by Rubel Hussain for ducks – Ervine first ball.

At 124 for four, there was a danger that the innings might stumble to a halt by Sibanda found another good partner in Forster Mutizwa.

They were 10 runs from victory when Sibanda, closing in on a second ODI century, was caught off the splice by Mahmudullah off Hossain for 96. It was his 14th half-century and included two sixes and eight fours.

Hossain also removed Chigumbura to finish with four for 26 but Mutizwa’s unbeaten 27 was enough to drag Zimbabwe across the line with 8.4 overs remaining.

It marked a second success for Zimbabwe this week, having won the one-off Test between the two sides by 130 runs on Monday after a six-year self-imposed exile from the five-day game.

“We will surely keep on improving after beating Bangladesh twice this week,” said Taylor. “But we know they will come back at us strongly.”

The second ODI takes place in Harare on Sunday. AFP