Zimbabwe were bowled out for 179 runs while chasing 334 against Afghanistan in the first ODI at Sharjah.

Zimbabwe were bowled out for 179 runs while chasing 334 against Afghanistan in the first ODI at Sharjah. The openers Hamilton Masakadza and Solomon Mire added a 50 run-partnership under 8 overs. However, they fell in the next two overs and thus Zimbabwe could never recover.

Zimbabwe played well in the Bangladesh Tri-nation series. They had managed to defeat Sri Lanka in one of the matches. They, all the same, could not survive against the Afghan spinners.

Mire was the highest scorer for them, scoring 34 runs with a strike rate of 136. He hit 2 fours and 3 sixes in his short innings before getting bowled by a brilliant yorker by Dawlat Zadran.

Dawlat got the first breakthrough for Afghanistan, and it was all spin for the Afghans from there. The spinners shared eight wickets among themselves by giving 103 runs. Rashid Khan was the star bowler for Afghanistan yet again, with figures 4 for 26 in his 5.4 overs.

Rashid picked the wickets of Ryan Burl, Malcolm Waller, Graeme Cremer and the last wicket of Brian Vitori, as Zimbabwe were bowled out for 179 under 35 overs.

Rahmat Shah, who recorded his career best score of 114 in the first innings, ended Kyle Jarvis’s cameo of 20 quick runs. For Zimbabwe, only 157 runs came off the bat while the remaining 22 were in extras.

After defeating Zimbabwe in both the T20Is, Afghanistan have taken a 1-0 lead in the five match ODI series. 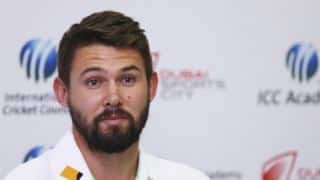