Zimbabwe's middle and lower order showed commendable batting skill as they took their team's lead to 350 on Day Four of the only Test against Sri Lanka at Colombo.

Zimbabwe‘s middle and lower order showed commendable batting skill as they took their team’s lead to 350 on Day Four of the only Test against Sri Lanka at Colombo. Sikandar Raza and Malcolm Waller resumed batting on Day Four with Zimbabwe s score of 252 for 6 on the board. Raza went on to score the maiden Test ton of his career. Zimbabwe lost two wickets in the morning session, and have two more in hand to make the lead even bigger. As play resumes, skipper Graeme Cremer will continue batting with Donald Tiripano. Live cricket scorecard: Sri Lanka vs Zimbabwe, One-off Test

Batting on his nervous nineties, Raza took only two deliveries on fourth day’s morning to bring in his much-awaited ton. Sri Lanka skipper Dinesh Chandimal opted for Dilruwan Perera to open bowling, with Lahiru Kumara introduced from the other end. However, he quickly replaced Perera with Rangana Herath. The batsmen showed respect to Herath, playing him with patience but sought boundaries off Kumara s overs to keep the scorecard ticking, which worked well for the batting team. Chandimal brought Perera back and the bowler rewarded the captain with the wicket of Waller for keeping faith in him. Waller, who played a paced-up knock on the third day, opted to slow down on Monday. As a result of poor shot selection and lack of timing, Waller hit one straight to Upul Tharanga at midwicket and was sent back for 68, breaking the partnership between Raza and him for 144 runs.

Zimbabwe had already taken the lead to 300 and it was time for the skipper Graeme Cremer to show his batting skills. The wicket affected the run rate for a few overs but then Cremer took charge, hitting frequent boundaries and releasing the pressure. Zimbabwe lost their second and the most crucial wicket of the day as Herath bowled Raza out. Herath bowled one down the leg, but Raza went for a predetermined reverse-sweep and ended up getting clean bowled for 127. His innings came in the right time for Zimbabwe and the efforts were thoroughly applauded with a standing ovation from the crowd and his teammates.

With the wicket, Herath completed his eighth 10-wicket-haul and equalled the number with Anil Kumble.

Cremer, however, carried on with his boundaries and this kept the run rate maintained. While a couple of shots looked chancy, few sweeps off Cremer s bat looked absolutely majestic. His partner Donald Tiripano has played exceptionally well in the first innings with Craig Ervine, and Zimbabwe will expect a similar knock from him in this innings so that the lead can get closer to 400.

An early lunch was taken as it started drizzling in Colombo. The groundsmen covered the pitch, but the conditions suggest the play can be resumed on time. 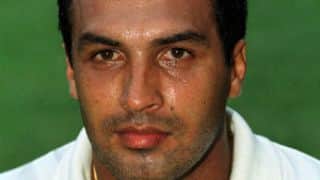