Zimbabwe coach Alan Butcher said he would be happy to throw the new ball to a spinner if it helps shock defending champions Australia in Monday's World Cup clash. 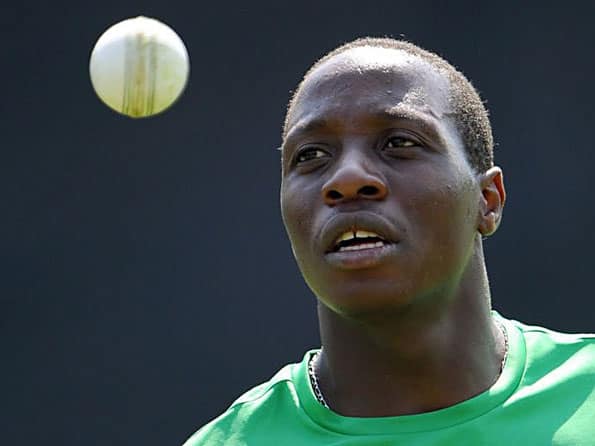 Zimbabwe’s Shingirai Masakadza tosses the ball up during training

Zimbabwe coach Alan Butcher said he would be happy to give new ball to a spinner if it helps shock defending champions Australia in Monday’s World Cup clash. Zimbabwe have a clutch of spinners, Raymond Price, Prosper Utseya and Graeme Cremer, who are capable of exerting pressure.

Butcher is aware that Australia have struggled against spin on slow pitches, losing both of their warm-up matches against India and South Africa. “We know spinners are our best bowlers. That is going to be our strategy and the Australians also know it. There is a chance of a spinner opening the bowling, but we have to bowl well,” said Butcher.

The tactic was used on Sunday when New Zealand off-spinner Nathan McCullum opened the bowling against Kenya in Chennai with four overs yielding 15 runs.

Englishman Butcher said Zimbabwe’s bowlers needed to restrict Australia to a total of 300 or below. “If it goes beyond 300, it’d be very tough for us,” said Butcher, who added that his unheralded team will need be at their best to stretch the champions.

“Probability is if both sides play their best cricket, the formbook suggests that we come second,” said Butcher, on the eve of his team’s day-night match.

Their lone defeat came in the first game played between the two sides in the 1983 World Cup in England while one match was abandoned due to rain.

Australia have also not lost a match in the last two World Cups in South Africa and the West Indies under Ricky Ponting.

“The longer the winning run is the closer it might be to coming to an end. It may not be us to stop them but someone has to. We have to prepare as well as we can. We are focused,” said Butcher.

Save the World Cup!