A defiant, unbeaten century from captain Brendan Taylor allowed Zimbabwe to build a solid platform on a sluggish first day of the first Test against Bangladesh at Harare Sports Club. 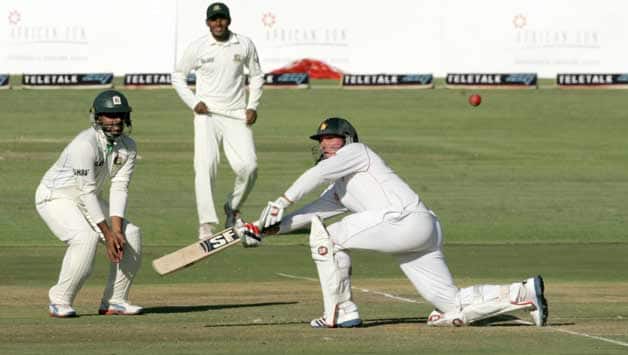 A defiant, unbeaten century from captain Brendan Taylor allowed Zimbabwe to build a solid platform on a sluggish first day of the first Test against Bangladesh at Harare Sports Club.

In their first home Test in 18 months, Taylor put Zimbabwe’s recent problems aside as he scored 105 not out and took his side from 65 for three early in the second session to 217 for four at the close of play.

Taylor endured a torrid tour of the West Indies last month and has seen his squad become increasingly dispirited in the wake of another contract dispute, but led from the front on a difficult pitch.

Although on the low side, Zimbabwe’s total represented a reasonable day’s work for the hosts after they were inserted on a greentop by Bangladesh, who lacked the fast bowling arsenal to take full advantage.

“If they had scored 300-plus today then I would have been pretty upset, but I think it’s still a pretty even game,” said Bangladesh coach Shane Jurgensen.

Robiul Islam charged in manfully for 24 overs, but after removing both of Zimbabwe’s openers cheaply, Bangladesh’s only genuine seam threat was unable to make further inroads.

Although Enamul Haque had Hamilton Masakadza caught at slip 10 overs after the lunch break to leave Zimbabwe in a spot of bother, Taylor was joined by Malcolm Waller and the pair put on 127 for the fourth wicket.

Both batsmen took their time to adjust to the pace of the pitch in the afternoon, before gradually lifting Zimbabwe’s lethargic run-rate in the third session.

Taylor offered just a single chance on the way to his third Test century, when he lofted Enamul to wide long-off where Shahriar Nafees failed to take a difficult catch on the run.

The partnership was finally broken by the second new ball, with Waller bowled for 55 by Rubel Hossain, who was then denied the wicket of Elton Chigumbura when replays suggested the bowler had overstepped.

In between those incidents Taylor went to three figures with a distinctive fist-pumping celebration that told of his recent frustrations.

“The celebration was due to the poor performance we had in the West Indies,” he said. “To fail in pretty much every game in the whole tour was tough to swallow, so today was very rewarding.

“I’ve prepared well, I’ve worked hard and it was nice to see it pay off.”

Jaydev Unadkat: Would have loved to bowl Super Over against Delhi Daredevils