Zimbabwe lost both opening batsmen as they attempted to overcome the significant first-innings deficit created by West Indies at lunch on Day 4 of 2nd Test.

Bulawayo: Zimbabwe lost both opening batsmen as they attempted to overcome the significant first-innings deficit created by West Indies centurions Shane Dowrich and Jason Holder on the fourth morning of the second Test. Dowrich scored his maiden Test century while Holder brought up his second as the pair extended their partnership for the eighth wicket to 212 on Wednesday, helping the West Indies post 448 all out in their first innings. Facing a deficit of 122, Zimbabwe then lost Hamilton Masakadza and Solomon Mire to go to lunch on eight for two in their second innings. Both wickets were taken by fast bowler Kemar Roach, as he bowled Masakadza and trapped Mire lbw in consecutive overs to leave the home side’s hopes of gaining a share of the two-match series in disarray. FULL CRICKET SCORECARD: Zimbabwe vs West Indies 2017-18, 2nd Test at Bulawayo

Zimbabwe’s chances of ending an 11-match losing streak in Tests had looked good when Sikandar Raza’s maiden five-wicket haul reduced West Indies to 230 for seven on the third afternoon at Queens Sports Club. But Dowrich and Holder constructed the West Indies’ highest eighth-wicket partnership in history, guiding the visitors to stumps on 374 for seven before continuing their assault on Wednesday morning.

Holder enjoyed some fortune on 78 when he was dropped by wicketkeeper Regis Chakabva off the bowling of Graeme Cremer, and made the most of it as he went on to score 110. Dowrich brought up his first Test hundred with a towering six off Cremer, but the partnership was finally ended in the following over when the wicketkeeper-batsman was trapped lbw for 103 by Tendai Chisoro.

Having gained his maiden Test wicket, Chisoro went on to bowl Holder in his next over before wrapping up the innings when he trapped Roach lbw. The left-arm spinner thus finished with figures of 3 for 113, while Raza ended with 5 for 99. 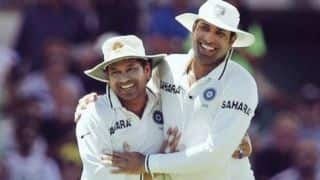