Brendan Taylor became just the third Zimbabwean batsman to score centuries in both innings of a Test match as his side completed a crushing victory over Bangladesh in the first Test at Harare Sports Club.

Zimbabwe won by 335 runs
Man of the Match: Brendan Taylor 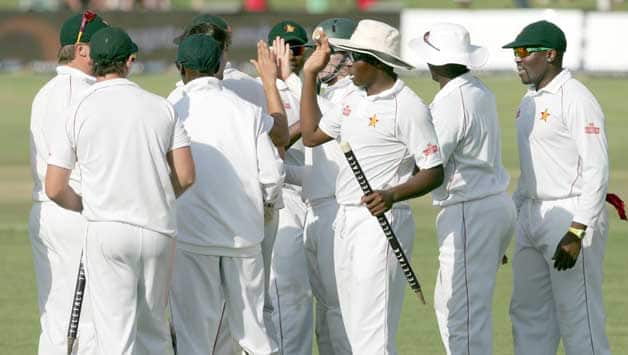 Brendan Taylor became just the third Zimbabwean batsman to score centuries in both innings of a Test match as his side completed a crushing victory over Bangladesh in the first Test at Harare Sports Club.

Set an unlikely 483 runs to win the match after Taylor had reached the landmark early today, Bangladesh folded to 147 all out to lose by 335 runs inside four days.

Zimbabwe‘s bowlers required just 49.2 overs to knock over the tourists in their second innings, with fast bowler Kyle Jarvis doing the damage before leg spinner Graeme Cremer claimed figures of 4 for 4 to wrap up the tail after tea.

Although Zimbabwe deserved credit for some accurate bowling, Bangladesh’s batsmen contributed to their own downfall as they grew impatient too easily and gifted their wickets away.

Having gone into the match as favourites, it was an embarrassing defeat for the tourists against their closest rivals, as Zimbabwe recorded their 10th Test victory and ensured at worst a share of the spoils in the two-match series.

No visiting batsman passed 50 in the match, with Mohammad Ashraful top-scoring in the second innings with 40 before being run out in bizarre fashion.

“I’m really disappointed in the way we played in this match, especially in the batting,” said captain Mushfiqur Rahim.

“I thought we had the technique to cope with their pace bowling but there were just too many soft dismissals in the middle, particularly from our experienced players.”

Zimbabwe had resumed on their overnight total of 187 for seven, with Taylor on 81, and the 27-year-old required just eight overs to get to three figures before declaring the innings on 227 for seven.

Man of the match Taylor was the first Zimbabwean captain to score twin tons in the same Test, and the third of any Zimbabwean batsman after brothers Grant and Andy Flower.

“To be grouped with the Flowers, two of the best players to come out of Zimbabwe, is a big honour,” Taylor said.

“Most importantly though we’ve come out with a good result and that means a lot more to me.”

Although Taylor’s 171 and 102 not out was perhaps not as impressive as Andy Flower’s 142 and 199 not out against the stronger opposition of South Africa in 2001, it nevertheless came in a match where no other batsman made more than 55.

The second Test gets underway on Thursday at the same venue.