Afghanistan ended their innings at 223 for 9 against Zimbabwe at the first ODI.

Afghanistan ended their innings at 223 for nine against Zimbabwe in the first One-Day International (ODI) at the Queens Sports Park, Bulawayo. Samiullah Shenwari scored a graceful 65 from 85 balls, while Tendai Chatara and Donald Tiripano emerged the pick among the bowlers, picking two wickets apiece and conceding 37 and 49 runs respectively.

The innings began on a slow note for the visitors, who are playing their first bilateral series against a Test-playing nation, as they lost their first wicket without scoring a run and managed to put only 24 runs at the end of ten overs. The Zimbabwean bowlers did not allow an Afghan partnership to build as they dismissed the next couple of batsmen at regular intervals to reduce the visitors at 58 for three.

The run-rate was low at 2.56 when the visitors were trailing at 77 for three at the end of 30 overs when the duo of Noor Ali Zadran and Samiullah Shenwari decided to step on the gas-pedal. The next ten overs brought Afghanistan 64 runs at the loss of one wicket, with three fours and sixes being hit in the process. Zadran was run out by keeper Chakabva at 43, narrowly missing his third half -century

After Zadran’s dismissal, skipper Mohammad Nabi stepped in with the responsibility of playing a captain’s knock to take his side to a respectable total. The duo of Shenwari and Nabi added 73 for the fifth wicket,with the captain scoring a quickfire 54 from 32 balls, frustrating the Zimbabwean bowlers in the process.

The Zimbabwean attack, which was superb in the first half of the innings, gradually began to lose their way after the 30-over mark. Runs started flowing freely for Afghanistan with Shenwari and Nabi at the crease. The bowlers did manage to retain some respect towards the end by taking three wickets in the last seven deliveries of the match.

The Afghan fielding and bowling attack has frustrated some of the best batsmen in the world, the proof of which was seen in the recent Asia Cup. A lot depends on the top order which consists of the experienced Vusi Sibanda, Pakistan-born Sikandar Raza and captain Brendan Taylor. 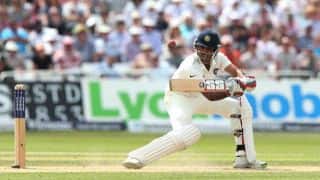