"We are pretty confident that we can bat for the day." - Lance Klusener, Zimbabwe's batting coach

New Zealand‘s seamers struck three vital blows on the fourth evening to keep the tourists on track for victory in the second Test against Zimbabwe at Queens Sports Club on Tuesday. After Neil Wagner had removed Chamu Chibhabha 40 minutes before the close of play, Trent Boult and Tim Southee grabbed two wickets in the final three balls of the day to send Zimbabwe to stumps on 58 for three in pursuit of an improbable 387 for victory. After bowling Zimbabwe out for 362 in their first innings to a earn a 220-run lead, New Zealand opted against enforcing the follow-on and instead spent the afternoon building a formidable target. LIVE CRICKET SCORECARD: Zimbabwe vs New Zealand 2016, 2nd Test at Bulawayo

With Kane Williamson and Ross Taylor putting on an unbroken stand of 140 in the space of 30 overs, Williamson was able to declare on 166 for two and allow his bowlers 26 overs at the Zimbabwean batsmen during the evening session. Although openers Chibhabha and Tino Mawoyo made a promising start in reaching 45 without loss, three dismissals before the close left Zimbabwe facing a long final day to avoid defeat.

“We are pretty confident that we can bat for the day,” Zimbabwe’s batting coach Lance Klusener said. “They’ve been in the field for a long time. From a team growth point of view, I am looking forward to it.” The hosts will draw strength from the performance of Craig Ervine in the first innings, when his 146 allowed them to put up their sternest resistance of the series. Also read: Zimbabwe 58-3 after Kiwis set target of 387

Having gone to his maiden Test hundred and reached 115 on day three, Ervine extended his knock on the fourth morning before finally holing out at the end of Zimbabwe’s innings. “Craig was really organised. He had a good plan and he knew what he wanted to do,” said Klusener.

“That’s where we need to get to with the other batsmen. It’s one thing having a plan, but it’s important to be comfortable with the plan. It was nice to see the reward that he got from a lot of hard work.” Having decided to bat again, Williamson went on to notch up another milestone as his unbeaten 68 made him just the fourth player to score fifty or more in his first three Test innings as captain.

West Indian Rohan Kanhai, South African Kepler Wessels and India’s Virat Kohli were the other three. Meanwhile Taylor continued his remarkable series with the bat, making 67 not out to take his series tally to 364 runs without being dismissed. Also read: India vs West Indies: ICC sanctions T20I series

New Zealand declared shortly after tea to begin their push for victory, and will go into the final day confident of clinching a 2-0 series victory. “We know it is a very slow and unresponsive pitch, so it will be nice to come back here and only have to grab seven more wickets,” said Boult.

“There are a couple of deliveries going over the top and a few staying quite low. Hopefully it deteriorates a little more on day five.” 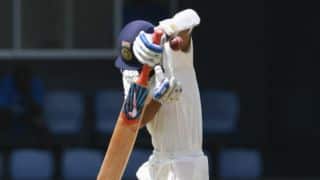 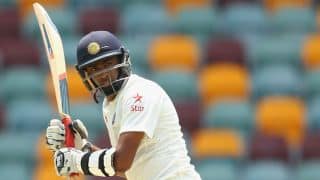