Brendan Taylor, the Zimbabwe captain made a fighting half century against the South Africa in the one-off Test at Harare. His fifty came in 89 balls. It is an important knock in the context of the game. As wickets are tumbling on the other end, Taylor hold one end up and scored important runs for his team. A captain’s knock for him.

Earlier Dane Piedt, the South African off spinner, took two more wickets after Lunch. He got the wickets of Hamilton Masakadza (45) and Regis Chakabva (0) in the 33rd over of the match. He also took the wicket of Mark Vermeulen (14) in his first ball in Test cricket. Piedt become the 19th bowler and second South African after Bert Vogler to take a wicket with his first ball in Tests. After that dale Styen another wicket in the form of Sean Williams (24). From 90 for two, the hosts slipped to 120 for five. 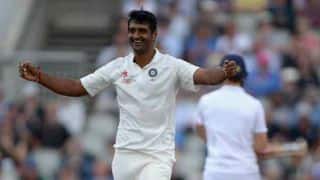