Zimbabwe vs South Africa one-off Test at Harare: Gutsy Zimbabwe end day one at 248 for 9

Zimbabwe vs South Africa one-off Test at Harare: Gutsy Zimbabwe end day one at 248 for 9

Dane Piedt become the 19th bowler and 2nd South African to take wicket with his first ball in Tests.

Captain Brendon Taylor played a fighting knock as Zimbabwe end day one of the one-off Test against South Africa on 248 for nine at Harare. A day, Zimbabwe would not be unhappy with. They’ve scored close to 250 runs, with a wicket still in hand, after some gritty and determined batting from the last pair, Tiripano and Nyumbu. Nyumbu played 67 balls for his nine. But day belongs to Debutant Dane Piet who took four for 90 in his 24 overs. For Zimbabwe Taylor made sure they went past 200 with a fighting 93.

Earlier Piedt, the South African off spinner, took the wicket of Mark Vermeulen (14) in his first ball in Test cricket. Piedt become the 19th bowler and second South African after Bert Vogler to take a wicket with his first ball in Tests. He took three more wickets. Dale Styen also got four wickets. In the morning Zimbabwe won the toss and decided to bat first. As expected South Africa made early in road as Vusi Sibanda got out for no score in the third over of the match.

At Lunch Zimbabwe were 64 for two. But the trouble began when Zimbabwe lost three quick wickets in the post-lunch session and reduced to 120 for five. After that Taylor and young wicket-keeper batsman Richmond Mutumbami (21) rescued Zimbabwe with a 59 run partnership. Even after Mutumbami got out after Tea, Taylor played his shots. He missed his hundred, what would be his fifth one, when he came down the track for the to Piedt and slogged his length ball to the deep-midwicket boundary where Duminy didn’t have to move much for that catch.

After that the tailenders made some useful contributions as the hosts reached 248 for nine at the end of day.  It is great day for Zimbabwe cricket as they are hosting World’s number one ranked Test side. South Africa is playing their full strength side in this match. Though Imran Tahir has been left out of the Squad for the Proteas, in his place off-spinner Piedt came in.

For the host Zimbabwe it’s a matter of pride and determination to give South Africa a tough fight. The have played two debutants in this historic Test match. off-spinner John Nyumbu and right arm pacer Donald Tiripano. They have done well in domestic cricket recently. Apart from those experience batsman Mark Vermeulen, who made a comeback to Test cricket after 10 years.

Zimbabwe  248 for nine at Stumps on Day one at Harare (Brendon Taylor 93, Hamilton Masakadza 45 ; Dale Steyn four for 45, Dane four for 90) against South Africa. 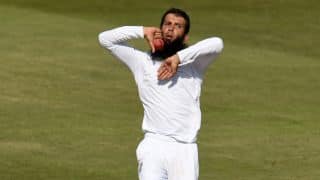