Half-centuries from Zimbabwe batsmen Peter Moor and Graeme Cremer kept Sri Lanka at bay, but the hosts were nevertheless on track for a significant first-innings lead on day three of the first Test at Harare Sports Club on Monday.

Half-centuries from Zimbabwe batsmen Peter Moor and Graeme Cremer kept Sri Lanka at bay, but the hosts were nevertheless on track for a significant first-innings lead on day three of the first Test at Harare Sports Club on Monday. Having seen Zimbabwe lose five wickets for 47 runs on the third morning as they replied to Sri Lanka s 537 all out, Moor and Cremer put on 132 for the seventh wicket to stabilise the innings. Although Moor succumbed to a short ball from debutant Lahiru Kumara to depart for 79 in the afternoon session, Cremer batted on to reach a career-best 62 not out as Zimbabwe went to tea on 291 for seven. Zimbabwe s collapse in the morning owed more to a series of rash strokes than trying conditions or outstanding bowling, as they resumed on a promising 88 for one. LIVE CRICKET SCORECARD: Zimbabwe vs Sri Lanka, 1st Test at Harare

Opener Tino Mawoyo started the trend when he pulled a short ball from Suranga Lakmal straight to the man in the deep to depart for 45, and two overs later Hamilton Masakadza prodded forward to edge Lakmal to slip for 33. A careless sweep from Sean Williams saw him pick out deep midwicket, and a lack of foot movement accounted for Craig Ervine and Malcolm Waller as they were trapped lbw by Dilruwan Perera. At 139 for six, Zimbabwe were in danger of being shot out and forced to follow on, but Moor s counter-attacking knock changed the momentum of the innings.

His two early sixes forced the field back, while Cremer was content to provide dogged support from the other end. The pair were only separated when Kumara produced a quick bouncer that Moor had no answer to, as the batsman fended to slip. Kumara went on to knock Cremer s helmet off his head and rattle the Zimbabwe skipper, who was fortunate to see his hook shot dropped at deep backward square-leg soon after. 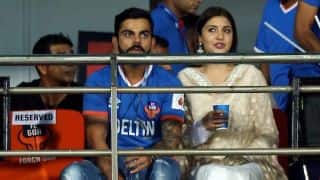 Amit Mishra: My objective was always to take wickets against New Zealand