Upul Tharanga and Kusal Mendis made a 75 run stand for the 4th wicket to form the base of the run chase.

Sri Lanka won the final of Tri-Nation Series, defeating hosts Zimbabwe by 6 wickets with 75 balls to spare at Queen s Park, Bulawayo. Sri Lanka chased down 161 in 37.3 overs. The heroes of the chase were Kusal Mendis (57) and captain Upul Tharanga (57*). Earlier, Zimbabwe were bowled out for 160: Jeffrey Vandersay took 3 for 50, while occasional seamer Asela Gunaratne came on to clean up the tail, finishing with 3 for 18. For Zimbabwe, the only performance of note came from Brian Vitori, whose finished with the figures of 3 for 52 from 9 overs. Live Scorecard, Zimbabwe vs Sri Lanka, Tri-Series Final at Bulawayo

Chasing 161, Sri Lanka got off to a poor start, losing opener Dhananjaya de Silva off the second ball of the innings. Their problems turned to worse with the wickets of Kusal Perera (14) and Niroshan Dickwella (16) in quick succession. Sri Lanka went to lunch at 44 for 3. They had earlier bowled out Zimbabwe well before lunch, which had enabled them half an hour s batting before the break. They went after the ball from the very onset, but the tactics did not work for them. They lost their top three batsmen within 7 overs. Some stringent bowling from the Zimbabwean pacers saw Sri Lanka losing the momentum.

The innings break gave the tourists some time to rethink. They also had two quality batsmen in Upul Tharanga and Mendis. Tharanga, with over 5,000 ODI runs under his belt, brought his experience into play. Both men paced their innings to precision, batting cautiously but not ignoring the loose deliveries. They were rewarded soon, as their persistence resulted in the bowlers losing their line and length. Once that happened the runs came easily, mostly in singles without dwelling in danger. Mendis took a leading role in this partnership while his captain appeared content in playing the second fiddle to him.

Zimbabwe did not help their cause with their sloppy fielding and indifferent bowling. The pre-lunch discipline waned. Mendis fell to an outstanding catch by Sean Williams near deep square-leg sent him back to the pavilion. By then the pair had added 75 runs stand from 21.2 overs for the 4th wicket.

Unfortunately, it came too late for Zimbabwe. At this stage, Sri Lanka needed 44 runs from 23.5 overs. Tharanga played his shots while Gunaratne rotated the strike efficiently. With 5 runs to get, he first brought up his fifty with a four through mid-wicket and a straight six.

Earlier in the day, Zimbabwe were off to a poor start when the Sri Lankan new-ball bowlers sent Peter Moor and Hamilton Masakadza back within the first 5 overs. Tansai Musakanda (36) and Craig Ervine (25) added 53 for the third wicket before both fell in quick succession. After that, Sean Williams (35) was the only one to provide any sort of resistance against Vandersay and Sachith Pathirana (2 for 26), but Gunaratne removed Williams and Tendai Chisoro in consecutive balls. Last man Vitori survived the hat-trick but fell next ball.

Man of the Match: Kusal Mendis.

Man of the Series: Kusal Mendis. 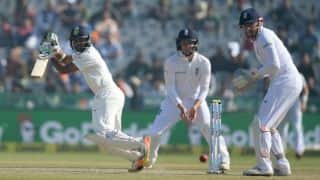 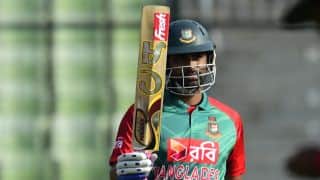