Inspired by Bollywood actress and team co-owner Preity Zinta's motivational speech, Kings XI Punjab will be out there to prove a point or two against table toppers Mumbai Indians in their next IPL match here tomorrow, said all-rounder David Hussey. 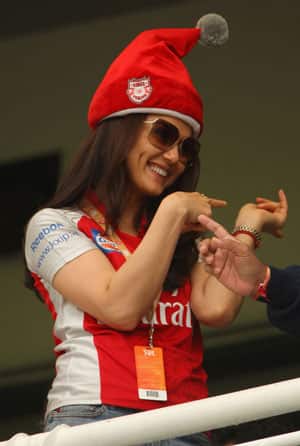 Inspired by Bollywood actress and team co-owner Preity Zinta’s motivational speech, Kings XI Punjab will be out there to prove a point or two against table toppers Mumbai Indians in their next IPL match today, said all-rounder David Hussey.

Kings XI are at the bottom of the points table in the 10-team event with just six points from nine games but Hussey said after Zinta’s inspirational chat with the team members yesterday, the Chandigarh outfit is determined to put up an impressive show in their last few matches of the tournament.

“The motivational speech by Preity Zinta last night was inspiring. You will see a completely different team against Mumbai Indians tomorrow,” Hussey told reporters on the eve of the match.

Asked what Zinta had said in her speech, Hussey, who had made just four runs against Pune Warriors here yesterday, said, “She told us that we looked a little bit flat. She told us that everyone of us is so talented and we can match any team in the world. It doesn’t matter whether we win or lose, but what is important is to put up a good show.”

“After that small chat last night, we are determined to finish on a high and put up an entertaining performance for our fans,” he added.

But achieving it against a formidable Mumbai Indians won’t be easy.

“Mumbai are a consistent team with depth in batting. They also have formidable bowling attack,” the Australian quipped.

“Our bowlers will need to bowl well and execute their plans. While fielding also we have to come good. If we do that it should help us create an extra bit of pressure on their batsmen,” he said.

“He (Malinga) is the leading wicket taker. He bowls fast and our batsmen will have to come up with individual plans to tackle him,” he said of the Sri Lankan speedster.

Feels good to be hopeful for a play-off berth: Dhoni