Starc in middle of nowhere produced some menacing deliveries in his spell and created a stir with his pace.

Mitchell Starc is undoubtedly one of the fastest bowlers in contemporary cricket. He is widely reckoned for his deadly inswinging yorkers and his ability to produce it on a consistent basis. He brought some life with his captivating spell on Day 3 of the second Test between Australia and New Zealand at Perth. Starc in middle of nowhere produced some menacing deliveries in his spell and created a stir with his pace. Live Streaming: Australia vs New Zealand, 2nd Test at Perth

Starc also bowled the second fastest delivery in Test cricket when his ball clocked 160.4 kph to Ross Taylor. Brendon McCullum was looking extremely uncomfortable against the firing deliveries from Starc. He bowled a deadly Yorker to McCullum at 154.8 kph which took a thick edge of his bat and piece came out. Though McCullum did reasonably well to get his bat down on time but could’t prevent it from breaking. Cricket has witnessed many incidents where a genuine fast bowler has broken the big bats and this one too is a memorable one.

Ryan Pierse for Getty Images captured this perfect image where McCullum looks at his broken bat. Few minutes later, Mitchell Marsh got the batter of McCullum with a good length delivery which shattered his stumps. The onus is on the visitors to make a comeback as they are already down by 1-0 in the series. 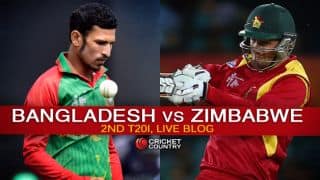