The ICC World Cup 2015 has come to the final stage where Australia plays against their trans-Tasman neighbours New Zealand at Melbourne Cricket Ground (MCG) on Sunday.

The ICC World Cup 2015 has come to the final stage where Australia plays against their trans-Tasman neighbours New Zealand at Melbourne Cricket Ground (MCG) on Sunday. This will be New Zealand’s first final in the history of World Cup while Australia have already four titles.

Both the co-hosts started their campaign in ICC Cricket World Cup 2015 in a dream manner. Australia battered arch-rivals England by 111 runs while New Zealand steamrolled Sri Lanka by 98 runs at Christchurch. Skipper Brendon McCullum’s team won all the group games from Pool A while Michael Clarke’s men suffered a sole setback against the former in nail-biting match At Auckland.

In the quarter-finals, Australia defeated Pakistan by six wickets at Adelaide in a dramatic encounter. Whereas, New Zealand mauled the unpredictable West Indies side by 143 runs at Wellington.

The final encounter at MCG seems evenly balanced looking at the statistics of the top performers from both the teams.  The opening batsmen in either side are unstoppable when at their best. McCullum (328 runs) has lead the side by example by giving a strong start in every game he has played. His partner in crime Martin Guptill (532 runs) rocked in the latter phase of the tournament, first with a match-winning hundred against Bangladesh and then with a classic double-ton against West Indies.

For Australia, Steve Smith (346 runs) has been in excellent form and his century at Sydney Cricket Ground (SCG) dumped India out of the ongoing mega event. Swashbuckling Glenn Maxwell (324 runs) has proved to be instrumental in Australia’s success so far in the tournament.

In the bowling department, both the teams give a stiff competition to each other. At one end, New Zealand’s Trent Boult (21 wickets) has been exceptional and tops the chart for the most number of wickets. On the other end, Mitchell Starc (20 wickets) from Australia has been the chief of destroyer with Josh Hazlewood (7 wickets) impressing mightily in the last two games.

The key difference could be veteran spinner Daniel Vettori (15 wickets), who has been the trump card for the team as spin is the only department where New Zealand edges out Australia.

Australia still looks to be favourites when they play in front of the jam-packed MCG crowd. Meanwhile, New Zealand have won all their games in their backyard and this final clash comes as a stellar test for them. But, you just cannot rule out the Blackcaps as there will be thousands crossing the Tasman sea to support their side and the support will be doubled when hundreds of Indian fans will mix with the Men in Black. 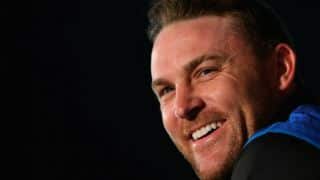