Freddie Coleman dropped Mathews in the deep when he tried sending the ball off Matt Machan’s bowling high over deep midwicket.

Seen in the above picture by Getty Images is Scotland batsman Freddie Coleman laying face down on the field after a missed opportunity of getting rid of Sri Lankan captain Angelo Mathews out in the 42nd over. (READ: Sri Lanka vs Scotland, Pool A match in Hobart in caricatures)

Coleman dropped Mathews in the deep when he tried sending the ball off Matt Machan’s bowling high over deep midwicket which cleared the front leg, but fell inside of the rope. Mathews was at 21 at that point of time and went on to punish the Scottish bowling attack with a brisk 21-ball 51 which included four consecutive sixes off Machan.  (ICC Cricket World Cup 2015: Full coverage)

A collective effort from the Sri Lankan batting line-up which had Kumar Sangakkara smashing his fourth consecutive World Cup century along with Tillakaratne Dilshan (104) and Mathews’ contribution helped the team post a daunting 363 against Scotland. At the end of the day, Sri Lanka emerged as the winners of the Pool A contest with a 148-run win over Scotland. (ICC Cricket World Cup 2015: Points Table) 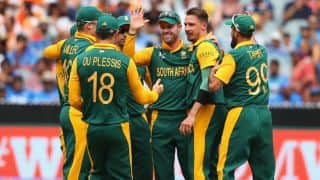