Prior to this, they had played in four ICC World events finals but each time it ended in heartbreaks. It was a moment of glory for two of Sri Lanka’s cricketing legends Kumar Sangakkara and Mahela Jayawardene when Thisara Perera stepped out and sends a Ravichandran Ashwin delivery out of the park.

On this day in 2014, Sri Lanka won the ICC World Twenty20 after they beat India in the final by six wickets. This was also the last T20 international for Sangakkara and Jayawardene, and they finally managed to lay their hands on an ICC trophy after a long wait.

Winning the toss, Sri Lanka invited India to bat first. Initially, India looked strong as Virat Kohli was going good but full credit to Sri Lankan bowlers, especially skipper Lasith Malinga who made it extremely difficult for Indian batsmen in the end. India could only manage 14 runs from the last four overs and ended with 130 on the board. The Lankan innings was led by a breezy unbeaten 52 from 35 balls from Sangakkara and they finished the chase off with 13 balls still remaining. 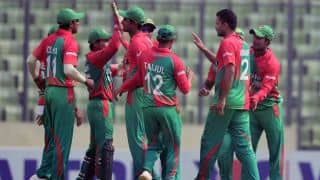