West Indies take on India in third Test and quite ironically, it will be played at the Darren Sammy International Stadium in St. Lucia, a country where the major population are livid with the treatment meted out to their national hero.

There was a span of well over a decade when they did not lose a Test series and now winning sessions are like discovery of gold. Last week, saving the second Test at Jamaica was a big achievement for the hosts who for the first time in the ongoing series against India, displayed some fight. Can the positive energy around West Indies cricket stay for long? Days later, the unceremonious sacking of Darren Sammy as their Twenty20 (T20) skipper made the mood sombre.

However, coming back to Test cricket, West Indies take on India in third Test and quite ironically, it will be played at the Darren Sammy International Stadium in St. Lucia, a country where the major population are livid with the treatment meted out to their national hero. Sammy’s last international appearance saw him lifting the ICC World T20 and for the second time but strange ways and West Indies cricket have been inseparable. ALSO READ: Carlos Brathwaite named West Indies T20I captain; Twitter reacts

Keeping this unavoidable pandemonium aside, West Indies can definitely stage a comeback in the series if they focus and believe in themselves like they did in the fifth day at Jamaica. Shai Hope has been drafted in the side but it is almost certain that Leon Johnson will play ahead of him as the opener. There is enough grass on the pitch and it should have enough pace and carry for all five days. The other change might be young pacer Alzarri Joseph coming in for Miguel Cummins, if not they might look to give the recently appointed T20I skipper Carlos Brathwaite another go.

Indians have a happy problem at their disposal. Opener Murali Vijay seems fit. Shikhar Dhawan was good enough in the first two Tests and KL Rahul responded to his selection at Jamaica with 158. If the axe does not fall on one of the openers then No. 3 batsman Cheteshwar Pujara, who has looked scratchy, might be the victim. READ MORE: “Best Buddies”, “competitors” and a “rare combination”

There are talks about Bhuvneshwar Kumar coming in for Umesh Yadav and Ravindra Jadeja for Amit Mishra, however, Indian bowlers have done well in this series and this bunch must be persisted with. Ahead of the third Test, we look at the possible XI for both the sides.

Sachin Tendulkar and Darren Sammy – a study in contrast 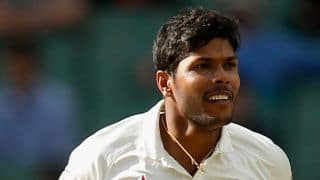 India vs West Indies: Should Umesh Yadav be replaced by either Bhuvneshwar Kumar or Shardul Thakur?