More than the stingless West Indian side, what will bother Indians more is the rain threat.

Australia’s 3-0 whitewash in the hands of Sri Lanka has helped India climb to the No. 1 spot in the ICC Test Rankings. However, India can only hold onto that spot if they manage to win the fourth Test against India at Port of Spain.

So far, India have won three Tests out of the 12 they have played at this venue. Indians have always enjoyed playing here and this is the venue, where Sunil Gavaskar has four hundreds and averages 99.12. It is how Pakistan enjoy a good record at The Oval, India have had memorable outings in Port of Spain.

The history does makes a good reading but will not matter much when India and West Indies will collide for the final Test of the series. Like the West Indies teams of yesteryears, the Jason Holder-led side lacks the sting. In fact, it would not be fair to even get into comparisons. Till 2002, whenever an Indian team has travelled to West Indies they have been the underdogs. ALSO READ: Times when India have won two or more Tests in overseas series

More than the stingless West Indian side, what will bother Indians more is the rain threat. India will have to win it to prevent Pakistan from displacing them from the numero uno position. If we have five days of proper play, India start as clear favourites.

West Indies showed good fight in the second Test at Jamaica and dominated the first two sessions at St Lucia. They are expected to field the side that lost the St Lucia Test. They performed well as a bowling unit and it was their batting which let them down in both the innings.

Usually, India are a side who do not believe in changing winnings combinations. Like him or not, Rohit Sharma will get another game and this will mean that skipper Kohli will continue to bat at No. 3. Rohit, who looked good in the second innings at Gros Islet, received a poor umpiring decision at 41. Again, fair or not, Rohit will get another opportunity, which means no Cheteshwar Pujara. READ MORE: Rohit Sharma, Pujara, Vijay and the age-old story of sacrificial lambs and holy cows

KL Rahul’s good show at the top of the order has created some confusion at the top. Murali Vijay, who injured himself ahead of the second Test is finding it difficult to break in. If proper senses prevail, he should make the cut ahead of Shikhar Dhawan, whose has not helped his case with his inconsistencies.

Ahead of the final Test, which West Indies will play for pride and India to desperately win, we look at the likely XI and the player comparisons. 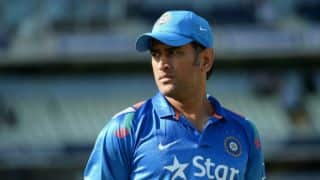