The eighth edition of the Indian Premier League (IPL) is set to witness another battle of the Royals when Royal Challengers Bangalore (RCB) take on Rajasthan Royals (RR) in the first eliminator match of the tournament.

The eighth edition of the Indian Premier League (IPL) is set to witness another battle of the Royals when Royal Challengers Bangalore (RCB) take on Rajasthan Royals (RR) in the first eliminator match of the tournament.

RCB’s strength lies in its batting with Chris Gayle, Virat Kohli and AB de Villiers forming the top three. They didn’t have a great start to the tournament but peaked at the right time. Mitchell Starc who missed out the first three games resurrected their wobbly fortune. The formidable side led by Kohli look favourites to lift their maiden IPL trophy but it’s all about performing on the given day.

RR began the tournament with five wins on a row and enjoyed the top table position for quite some time. However they lost the plot midway and were on brink of an exit. Shane Watson, who was relived from captaincy, struck form in their do-or-die encounter against defending champions Kolkata Knight Riders (KKR). His hundred ensured RR of a playoff berth.

Like RCB, RR too have a heavy top three with Ajinkya Rahane, Watson and captain Steve Smith filling the slots. Both sides have got a good middle-order but in terms of form, the Bangalore side holds an edge. However, with all-rounders like James Faulkner, Stuart Binny and Chris Morris, RR bats deeper. In the bowling department, RCB’s hopes lie of Starc. They are over reliant on the Australian pacer and he hasn’t disappointed. Harshal Patel has supported Starc and so has leg-spinner Yuzvendra Chahal. The RR too has a decent bowling attack with Morris being in form but unlike RCB, they don’t have an in-form spinner playing for them and also Faulkner has been off colour lately.

Either of the two sides will be playing their last IPL match of this edition tonight. Comparing the players, there isn’t much to differentiate. While RCB hold an edge in terms of explosive batting, RR have better depth. 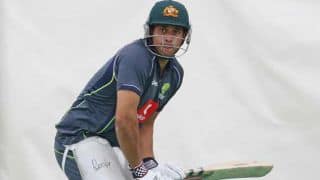 Usman Khawaja set to return after knee injury; will lead Australia A against India A