On this day, in 2010, India pulled off a remarkable win and once again the crisis man was VVS Laxman.

India then the world no.1 Test side travelled to South Africa for a tough tour. Despite the no.1 tag, not many expected India to outdo the Proteas and they suffered a humiliating innings defeat in the first Test at Centurion. Adding to their woes, a green track awaited them at Kingsmead and worse, South Africa put them in after winning the toss. However, India turned the tables around to register a famous 87-run win. A win regarded as one of their greatest in Test history.

On this day, in 2010, India pulled off a remarkable win and once again the crisis man was VVS Laxman. After Dhoni lost the toss (his 12th loss in 13 games in 2010), India put into bat were in a spot of bother. On a lively wicket, South Africa bowled out India for 205 and were going steady at 64 for 2. From thereon, Zaheer Khan (3 wickets) and Harbhajan Singh (4 wickets) combined to trigger a South African collapse. South Africa managed 131 but had reduced India to 56 for 4 with three of their top batsmen — Virender Sehwag, Sachin Tendulkar and Rahul Dravid, back in the pavilion.

Batting wasn’t easy but VVS Laxman batted with the tail, scoring a resolute 96 to help India set a target of 303. His 96 came from 171-balls and contained 12 boundaries. Laxman, while receiving the Man of the Match award, described his innings as, “One of the most challenging wickets I have played on in my career.” Missing the hundred didn’t matter much as he added another classic to his illustrious CV. The great man put it aptly, “You always want to be remembered as somebody who contributed to winning matches for the country.”

The Indian bowlers once again tamed the strong South African batting as they were bowled out for 215. India had drawn level. In the above picture we see an ecstatic Indian team celebrating a rare overseas win. 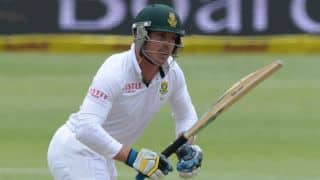