John Hastings is an Australian cricketer who is known for his effective all-round skills in the shorter formats.

John Hastings is an Australian cricketer who is known for his effective all-round skills in the shorter formats. He is primarily a right-arm medium pace bowler who is very handy with the bat lower down the order. Hastings is a canny bowler and has the ability to generate a bit of bounce from the track

In the above photograph captured by Robert Cianflone for Getty Images, Hastings is seen with his wife Briannan Hastings at the 2016 Allan Border Medal ceremony at Crown Palladium on January 27, 2016 in Melbourne.

A heavily built Hastings burst onto the international scene in a One-Day International  (ODI) game against India at Visakhapatnam in October 2010. In addition to his prowess on the cricket field, Hastings is also a qualified physical education cricketer. He also received the Bradman Young Cricketer of the Year Award in the year 2010. Hastings has also featured for Chennai Super Kings (CSK) and Kochi Tuskers Kerala (TSK) in the Indian Premier League (IPL). 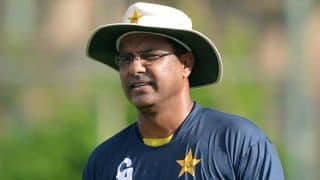