It was one of the bravest acts seen on the field of cricket. On July 14, 1984. Malcolm Marshall defied medical advice and came out with left hand in plaster to bat one-handed and help Larry Gomes get to his hundred against England at Headingley. The photo above shows Marshall taking on English paceman Paul Allott.

Gomes had resigned himself to remaining unbeaten on 96 when Joel Garner was run out to become the ninth wicket to fall. Marshall had broken his thumb in two different places trying to field a stroke from Chris Broad on the first morning and was advised not to play cricket for at least 10 days. He was out of the Test, for sure. But then Marshall had other ideas. He batted for 16 minutes and in the process helped Gomes get his hundred, but not before raising some laughter at his one-handed attempt to bat!

What followed was staggering. He wore a strapping on his injured arm and bowled with hostile pace, with zero use of the other hand to finish with career best figures of 26-9-53-7. England were bowled out for 159 in 65 overs. They lost the Test by eight wickets and the series 0-5. 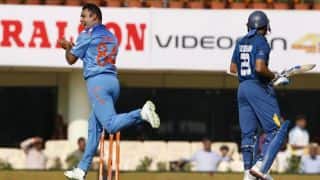