Mithali Raj has grabbed the eyeballs of the cricket cognoscenti and has given Indian women cricket a new recognition.

Mithali Raj has grabbed the eyeballs of the cricket cognoscenti and has given Indian women cricket a new recognition. Recently, she became the first Indian and second in women’s One-Day International (ODI) cricket to register 5000 runs and created history by scoring the same in 157 matches. Being acknowledged as the Lady Sachin of India she has made name for herself with some fantastic records to her name.

Here are some of her career highlights and iconic feats achieved by Mithali with the bat:

She marked her presence in world cricket at a tender age of 19 when she scored a career defining 214 against England in the second and final Test at Taunton in 2002. It was then the highest score in Women’s Test cricket. She has been one of the most prolific run-scorer for India and possesses magnificent temperament accompanied with fearless stroke play. She’s been a productive cricketer in the ODIs and averages just over 48. Although she hasn’t played enough Test in her career, she has still made a good impression as she averages 51 in the longer format.

Mithali’s skill sets and approach are somewhat similar to Sachin Tendulkar and Virat Kohli. It’s a pity that women’s cricket doesn’t get enough exposure. The Jodhpur-born 32-year-old was honoured with Padma Shri from President Pranab Mukherjee earlier this year for her terrific contribution towards cricket. In 2003, at the young age of 20, she has also received Arjuna Award.

Women’s cricket doesn’t get as much spotlight as men’s; in fact the disparity is huge. The Board of Control for Cricket in India (BCCI) should look forward to invest more in women’s cricket, as the country has some extremely talented cricketers like Mithali, Jhulan Goswami, Thirush Kamini and Amita Sharma.

In a country like India where men’s sports have always got the preference, Mithali has defied all the odds and made a significant contribution in the game of cricket. 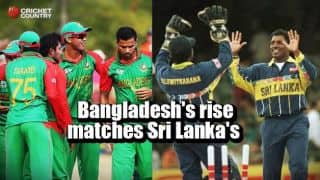