In the above photograph, Indian cricketer Parthiv Patel is seen enjoying a moment with his wife Avni and daughter Venika. He currently represents Gujarat in domestic cricket and will play for Mumbai Indians in this year’s Indian Premier League (IPL).

Avni and Parthiv were childhood friends and got married on March 9, 2008, which was also his 23rd birthday. Avni’s maiden name was Zaveri and she is an interior designer based in Ahmedabad.

Parthiv made his Test debut back in 2002 against England at Nottingham. At 17 years and 152 days, he became the youngest wicket-keeper in Test history.

The left-hander from Gujarat was picked for 2003 World Cup squad. Parthiv, who played his last One-Day International (ODI) for India in 2011, has scored 683 runs in 20 Tests and 736 runs in ODIs. 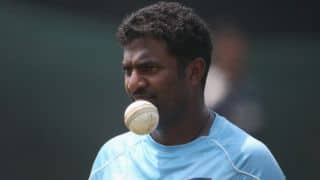