PHOTO: Guess which one is Kevin Pietersen?

PHOTO: Guess which one is Kevin Pietersen?

Kevin Pietersen shared a picture from his college rugby days.

Kevin Pietersen shared a picture from his college days when he used to play rugby. Pietersen lived in South Africa for a long period before former South Africa ODI skipper Clive Rice suggested the batsman to move to England to pursue a career in cricket. Earlier, Pietersen has hailed his side’s Ashes win against win against Australia as “brilliant”, but not as good as the one he won the coveted series with in 2005 which had stronger batting and bowling, and a tougher Australia team to overcome. Cook’s side reclaimed the Ashes with a remarkable fourth Test win at Trent Bridge in just two days and 40 minutes after bowling the series favourites out for 60 runs on the first day.

“This team has been brilliant, but our 2005 side was better. I think our batting line-up was stronger than this side, and with the likes of (Simon) Jones, (Steve) Harmison and (Andrew) Flintoff we definitely had a much stronger bowling attack,” Pietersen was quoted as saying by dailymail.co.uk on Monday.

“There were stronger characters in both sides in the 2005 series too. Australia had the likes of (Shane) Warne, (Adam) Gilchrist, (Justin) Langer, (Matthew) Hayden, and (Ricky) Ponting while we had Harmison, (Michael) Vaughan, Flintoff, and me whacking it round with a stupid hairstyle. So I think there was definitely a lot more for the crowds in 2005,” the former England captain added.

The 35-year-old added that the appointment of laid-back Aussie Trevor Bayliss as head coach and Paul Farbrace being retained after the sacking of Peter Moores as inspired and the catalyst for a freer style of play that the youthful England squad can flourish under.

“I think ( director Andrew) Strauss has made some good decisions, especially with Trevor Bayliss and Paul Fabrace and those guys have done a fantastic job in turning it around this summer,” Pietersen said.

David Lloyd shows how he remains young and fit at 68 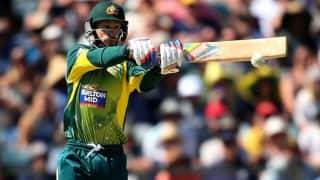 Australia A register massive 108-run win over South Africa A