Virat Kohli and Anushka Sharma have been in news for a long time because of their relationship. The two Indian stars, albeit from different industries, enjoy tremendous following as well as criticism. Anushka Sharma has tasted success of late on the big screen, whereas Virat Kohli has had mixed run as well. However, runs are not coming for the Indian batting superstar as they used to come few months back, and it can be said that the century against Pakistan in the ICC Cricket World Cup 2015 was the only good knock Virat Kohli has played so far in the first seven months of this year. READ: Anushka Sharma reveals wedding plans with Virat Kohli

The couple was seen at the Wimbledon 2015 semi-final between Novak Djokovic and Richard Gasquet in London a few days ago. Ironically, in the same match, Indian cricket legend Sachin Tendulkar was also seen in the attendance along with his wife Anjali. READ: Anushka Sharma visits Virat Kohli’s house in New Delhi

During India’s tour of Australia 2014-15 wherein the team played four Tests in the Border-Gavaskar Trophy, Anushka Sharma was spotted several times in the pavilion to cheer for Virat Kohli. On one of the occasions, Virat Kohli blew a kiss to her after completing a century. But unfortunately, Virat Kohli has not had an excellent time with the bat after that Test series, and the run machine has somewhat dried up. READ: Virat Kohli confirms relationship with Anushka Sharma 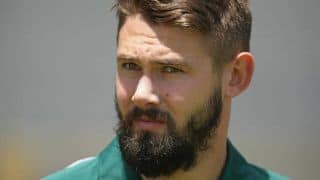 The leap of joy!